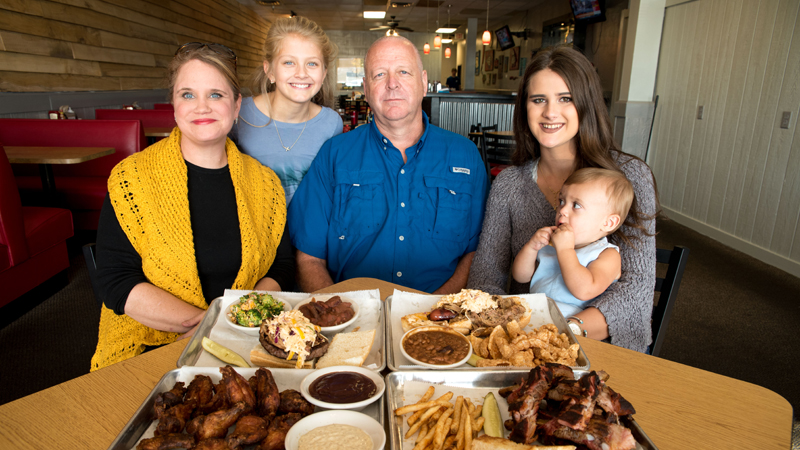 HOOVER – Barbecue joints are common in Alabama, but Swamp Monster BBQ in Hoover offers the local staple with a Cajun twist.

“Everything about us is a little different,” owner Michael O’Connor said.

After catering out of their home for several years, Pelham residents Michael O’Connor and Michelle O’Connor decided to open a restaurant.

Swamp Monster opened Aug. 15 and is located at 1843 Montgomery Highway South in Hoover.

“When you cater, everybody wants to know where your restaurant is,” Michael O’Connor said. “We didn’t have one, and here we are.”

The O’Connors are still catering; in fact, they said that side of the business has only picked up since the restaurant opened.

O’Connor has roots in New Orleans, which is evident in the dishes.

Swamp Monster offers a bowl of Cajun pork rinds to all guests. The menu includes a barbecue po-boy; burger made with ground sirloin, brisket and short rib, and topped with smoked barbecue, then sauce and slaw; oversized Kobe frankfurter topped with chopped pork, cheese and slaw; “Gator Greens;” nachos made with pork rinds instead of tortilla chips; and smoked chicken wings.

All barbecue is cooked on-site, said O’Connor, who also uses a dry rub that is his own creation.

Michelle O’Connor is responsible for several of the recipes offered at Swamp Monster, including mac’ and cheese, broccoli salad and Mardi Gras slaw.

Michael O’Connor said the most commonly asked question at the restaurant is where the name came from. He answers simply that when the couple started catering, they needed a name.

“It popped in my head,” O’Connor said.

O’Connor is also the “creative genius” behind the restaurant’s alligator logo, named Boudreaux.