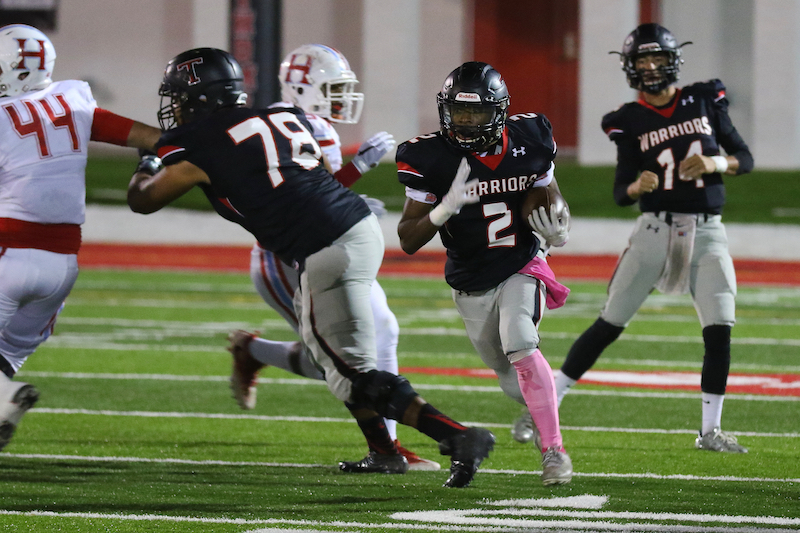 Corey Burroughs looks for room to run on Oct. 27 in Thompson’s final regular season game of the year against Hillcrest-Tuscaloosa. (For the Reporter / Eric Starling)

Neither team could get into a rhythm early. On their third possession, the Patriots took advantage of a short field and scored on five plays from 22 yards out. 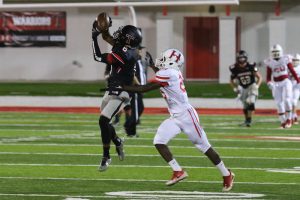 Thompson took possession with 1:20 remaining in the first quarter and moved the ball to the Patriots 31 yard line. Scrambling out of the pocket, quarterback Caleb Ragland looked to throw the ball out of bounds on first down, but a leaping tip-drill play by Hillcrest looked to have given the Patriots the ball on a well-played interception.  Ragland was hit late on the play and therefore the interception was nullified and the Warriors moved into the red zone. As the second quarter got underway, Ragland connected with Morris Edwards for a nine yard score. The Patriots blocked the extra point, leaving it 7-6 Hillcrest.

After the Patriots scored another touchdown just before the half, Ragland led the Warriors down the field, and with time running out, they added a 27-yard field goal to make it a 14-9 game at the half.

The Warriors got first possession in the second half and used three quick passing strikes to open up the running game.  Corey Burroughs and Shadrick Byrd carried the ball during the drive with Byrd punching it in from two yards out. The Warriors failed on the two-point conversion, but had taken the lead at 15-14.

Hillcrest’s Brian Robinson then  scored his second of three touchdowns, but the Patriots missed the extra point, retaking the lead at 20-15.

Ragland took the Warriors into Patriot territory, and eventually faced a fourth and one on the Patriots 18-yard line.  Ragland rolled out and hit Alondae Vasser for the score, and then Byrd scrambled in for the two-point conversion, giving the Warriors a 23-20 lead early in the fourth quarter.

The Warriors had four turnovers on the night, with two interceptions and two lost fumbles.  Turnovers in the fourth quarter proved costly as the Warriors were unable to respond to the two additional scores by the Patriots.

The Warriors finished the season 5-5 overall.

Spain Park is one of two county teams facing off against undefeated opponents this week. How will the Jags fare... read more