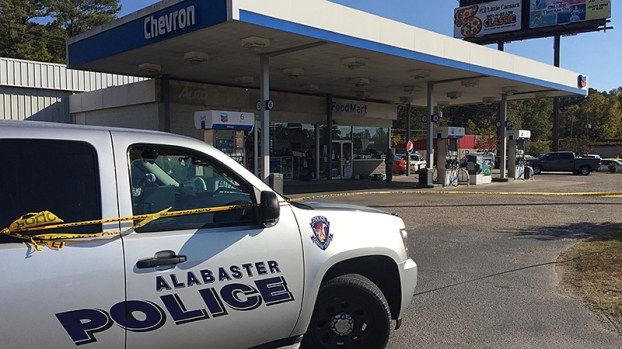 ALABASTER – The Alabaster Police Department is asking for the public’s help in locating a murder suspect after a clerk at a convenience store on U.S. 31 was killed during a robbery on Oct. 30.

Police responded to the Chevron gas station in the 1300 block of U.S. 31 at about 11:30 a.m. after receiving a report of a robbery at the gas station. When officers arrived, they discovered the clerk deceased, said Alabaster Police Chief Curtis Rigney.

Rigney said the robbery and murder likely happened sometime between 9-11:15 a.m. on Oct. 30, and said the department is seeking information from anyone who was near the scene. As of 3:20 p.m., police had not yet released the clerk’s name, pending notification of the victim’s family members.

“We are asking for any help from anyone who may have seen anything in that area between 8 and 11:15 this morning,” Rigney said. “If anyone has any information whatsoever, we are urging them to call our office and speak to a detective.”

Anyone with information about the crime should call the department at 663-7401.

“This is our first homicide in six years,” Rigney said. “This is a sad day in the city of Alabaster.”

By GRAHAM BROOKS / Staff Writer HELENA–The Helena Huskies could not finish out the 2016 season on a high note... read more