A flight of fancy

Story and Photographs by Laura Brookhart

Ruben Vuittonet has folded many cranes since fifth grade, some 39 years ago.

“Over the years the craftsmanship has improved, to a point, and still I am ever amazed by their individuality—at how variations in paper, environment and myself contribute to produce a crane subtly different from those that came before.”

Vuittonet has collected a number of books on origami and always enjoys learning new forms; however, he notes, “when permitted to follow their natural inclination, my hands always return to the form I learned first and love best, the crane.”

He further expounds, “Origami is an art appropriate to both the dilettante and the expert. The amazing variety of form offers the artist opportunities to revel in simplicity or aspire to complexity.”

“As it happens, it never occurred to me to count them along the way,” he adds.

An ancient Japanese legend promises that anyone who folds a thousand origami cranes will be granted a wish by a crane. 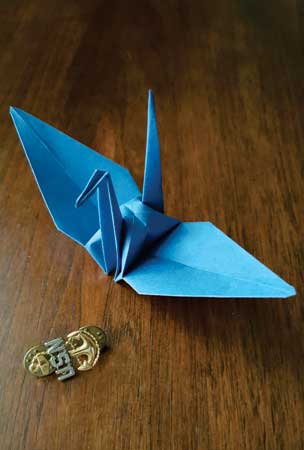 Vuittonet’s wish is to travel to Hiroshima, Japan to fold his 1,000th crane at the Children’s Peace Monument. In pursuit of that, he has started a GoFundMe page and has a beautiful website that expounds on this dream and tracks his progress.

This endeavor honors Sadako Sasaki, a little girl who was 2 years old when the atomic bomb was dropped. She died at the age of 12 in 1955, from what her mother referred to as atom bomb disease. Before her death, she folded 1,000 paper cranes in the hope that she would be granted the gift of health from the gods.

Her story transformed the paper crane into a symbol of hope and peace for innocent victims of war.

Vuittonet will web cast the folding of the 1,000th crane on the 1,000th day of the project.

“I will dedicate the final crane to Sadako Sasaki and all others who perish during war or from other violence,” he said.

His first crane for this project was folded Nov. 15, 2014 and the total, now over 700, is graphed on his website. Also updated minute by minute are the number of days, hours, minutes and seconds until his anticipated trip.

Each most recent crane and its back story are also shared, as for example one folded after spending an afternoon with his sons, Connor and Trey, shopping for their first month of school good behavior award.

“We went shopping for LEGO sets,” he said. “Trey kept insisting that I purchase the TIE Fighter set modeled from the TIE Fighter in Star Wars: The Force Awakens. I compromised and purchased the Darth Vader character set. One hundred and sixty assembled pieces later, Vader was as intimidating as ever. I swear I can hear his wheezing—I mean breathing—while I sleep.”

Vuittonet has worked in IT and web design since 1993. He and wife, Haley, a medical professional, have three children, and the two eldest attend Helena schools.

During a week’s stay at Children’s Hospital with his son, Vuittonet folded and presented 64 cranes to other patients.

“My plan for displaying the cranes when the project is completed,” Vuittonet shares, “is to make a dovetail joint box for all of the photos of each crane. Additionally, I will have an acrylic cylinder containing all the paper cranes that may employ an Arduino custom lighting solution.”

Meanwhile, on the website is an illustrated diagram, if after reading this you feel inspired to fold your own paper crane!

Navigate through Vuittonet’s lovely website via the crane in the upper left hand corner. Visit Conceptual-nachos.com/images/1000Cranes/FinalResponsive/1000Cranes.html.