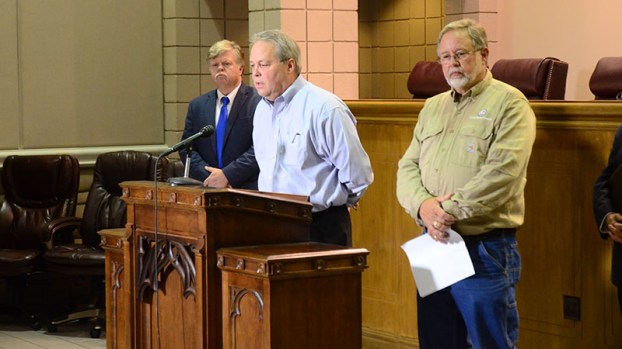 A press conference was held on Tuesday, Nov. 1 at Helena City Hall that centered around the Oct. 31 response to a gas pipeline explosion that occurred off River Road outside the city limits of Helena. (Reporter Photo/Graham Brooks)

HELENA–Approximately 24 hours after a gas pipeline explosion occurred on River Road near the Helena city limits that resulted in a fatality, five individuals injured and a large fire that has since been contained, several of the involved agencies held a joint press conference at Helena City Hall on Nov. 1, to summarize the incident and discuss plans moving forward.

Beck confirmed that a nine-person contract crew was working on Colonial Pipeline Line 1 doing excavation maintenance work when the pipe was struck causing the explosion on Oct. 31.

“As I understand it was a nine-person crew that was involved and five were injured, one person was killed and one of those injured has been released from the hospital,” said Beck.

Beck could not comment on the condition of those victims injured out of respect for the victims and their families.

When asked if the repair work on the pipeline was related to the spill that occurred on Sept. 9, Beck said it was and that the crew was “doing work in preparation to do a final repair for the incident earlier, but it’s normal routine work and something that we do all the time.”

At one point of the press conference, Beck fought back tears when discussing what he initially felt when hearing news of the explosion.

“I’ve been working for Colonial for 38 years,” said Beck. “The contractors that we have are like family and the first report I heard was that we had people that were critically hurt and in the hospital. Nobody at Colonial and none of our contractors ever want to hear that or go through that. We spend a lot of time, money and effort to make sure that never happens, so when you asked me what I felt, I felt bad and I still feel bad. This is something that is not a routine thing for us and it’s a tragic accident. We’re going to try to learn from it and figure out how to keep it from happening again.”

In addition to the fatality and injuries, Colonial was forced to shutdown both of its main pipelines, but as of 11 a.m. on Nov. 1, Line 2 has been restarted but Line 1 will remain shutdown for the remainder of the week.

Officials with the Alabama Department of Emergency Management said tests have been conducted that concluded there has been no impact on the air quality around the explosion site and the public is not at risk as far as that goes.

Hall said he was happy the city was able to utilize a citywide emergency notification system after the incident.

“We have one of the only emergency notification systems citywide that is used to notify residents that we invested in about three years ago just for instances such as this,” said Hall. “The payoff with that is tremendous if we have to evacuate people. The introduction of that emergency notification system has been a great asset for us and we were pleased to utilize that two times last night just to let people know in that part of Shelby County and the city of Helena that everything was OK outside the 3-mile radius.”

Lastly, Butler extended his condolences to the families and victims of the explosion and said he was “disappointed to be standing here again in such a short period of time.”

“We’re certainly heartbroken that this has happened again but we’re really appreciative of Colonial’s efforts to include us and allow us to have a voice and input,” said Butler. “We certainly don’t want to be a distraction or cause extra work for the people who are dealing with the fire or handling injuries. As things settle down, we’ll be spending more time out here. I was able to visit the site today briefly and at this point we see no impact on the Cahaba River.”

For updates on the gas line explosion and Colonial Pipeline’s response, visit Helena.colonialresponse.com.

By EMILY REED / Special to the Reporter CALERA – Students at Calera Intermediate School were presented with the opportunity... read more