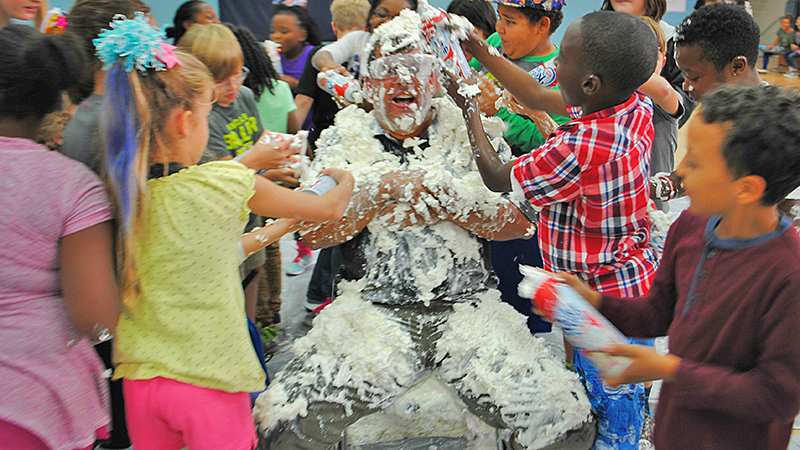 Calera Intermediate School students had the option to spray Mayor Jon Graham (center) with Reddi-wip on Oct. 25 as part of a fundraiser “Coinwars.” (Contributed)

CALERA – Students at Calera Intermediate School were presented with the opportunity to spray Mayor Jon Graham with whipped cream Oct. 25 as part of a new fundraiser, Coinwars.

“I was definitely surprised with how many cans were coming at me at one time,” Graham said. “They really covered me in the stuff.”

Students at CIS spent the week of Oct. 24-28 competing against classes to see who could raise the most money as part of Coinwars, a fundraiser where kids could bring various types of coins to school each day.

“We wanted to come up with a way to raise money for our school for various projects we would like to do,” Jackson said. “Teachers at the school got to keep 20 percent of the amount raised, and it was a good way for us to raise money to do improvements for things that are not always in the budget.”

Each day of the week students had the option to bring pennies, dimes, nickles or quarters with the final day being “coins, cash or checks.”

“Each day there was an incentive for the top three classes in grades 3-5,” Jackson said. “So, one of the popular days was the day students could spray Mayor Graham with Reddi-wip.”

“We had a great time this week,” Jackson said. “One day students could silly-string their teachers. We had teachers participate in a soccer match using giant inflatable ball. And we had a DJ Fuzzy dance party in the auditorium for the top classes that raised the most money.”

Jackson said the most popular day for students to bring money to school was the day where the incentive was getting to spray Graham with Reddi-wip.

“We asked Mayor Graham if he would mind being sprayed and he was willing to participate so we really promoted it,” Jackson said.

Graham was given the option to don a clear poncho to protect his clothing from the whipped topping, but declined the offer so the students could enjoy spraying him from head to toe.

“I didn’t think it would be very fun to cover up in a poncho while they sprayed me, so I told them they could spray me just as I was,” Graham said. “I definitely was surprised when I saw how many cans were coming at me at once. I think I had whipped cream in my ears, mouth and nose, but I am always eager to help the schools in Calera. I had a good time watching the kids laugh at spraying me.”

Jackson said the fundraiser was such a success that the school plans to make it an annual event.