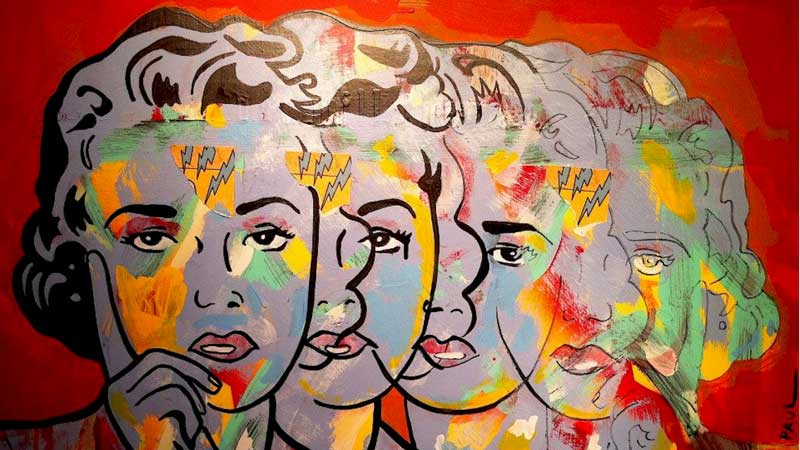 Most people probably wouldn’t think to paint a fox in a dress shirt and tie. But it’s that eye for the abstract that sets Alabama native Paul Cordes Wilm and his artwork apart — and made him the 2016 Featured Artist of Moss Rock Festival.

Wilm has been painting colorful pieces and using recycled items to craft masterpieces for years, and he continues to push visual boundaries.

“I’ve been drawing and painting ever since I can remember,” says Wilm, who seriously started painting about 15 years ago. “I’ve always had a passion for it.”

Wilm says he gets his inspiration from everything, ranging from a wood board that has a unique shape from vintage ads. He even has an entire art collection centered around the state of Alabama called “Alabstractions.”

“I have a sort of ‘Frankenstein’ approach with a lot of my work, toying with two or three vintage images and combining them to make something brand new and slightly more modern,” Wilm says.

His artistic style is folk-pop, combining elements like found wood, house paint and pop imagery to create his pieces. He even creates smaller ones have hooks and can even be used as key chains.

“My favorites are usually my more experimental pieces,” Wilm says.

It’s safe to say his colorful paintings have a style of their own.

And it’s that unique style that caught the planning team’s attention for Hoover’s Moss Rock Festival. Wilm was chosen as the festival’s 2016 Featured Artist, which meant he was tasked with creating the event’s iconic poster.

For the past three years, the festival has featured memorable poster images created by local artists. Remember Susan Shoemaker’s “Dwarf Rabbit,” Darrell Ezekiel’s “Swirl Squirrel” or last year’s Chiharu Roach’s hair-tangled, insect piece? These posters are used throughout the festival and for marketing.

Wilm wanted to continue the animal theme from past years with his posters, and that fit right in with his artistic style.

“I enjoy painting the animal-headed people a lot,” Wilm says, “because they’re playful and might encourage someone to ask themselves, ‘What animal am I? Which animals do I identify with?’”

He chose a fox as the subject for his poster artwork, putting the animal in a dress shirt and tie, surrounded by leaves. The backdrop for the piece was an outline of the state of Alabama. But creating this work of art didn’t just happen overnight and was a collaborative effort, Wilm says.

“It was fun because there were several meetings involved with the Moss Rock staff, with ideas and possibilities bouncing around,” he says. “They would tell me different elements of my past work that they enjoyed, and I’d present them with ideas. It’s usually just me making decisions, so the teamwork design approach was really enjoyable.”

In addition to creating the poster for the festival, Wilm will also be showcasing his artwork there and encourages people to come check out all there is to see.

“It combines environmental thinking with new and innovative concepts,” says Wilm of the Moss Rock Festival. “It also showcases so much great artistic and musical talent.”

This weekend event attracts about 12,000 visitors each year and has a variety of pieces from local artists, along with a Beer Garden, The Sweetery, children activities and more.

People can view Wilm’s artwork beyond the show, as well. He displays his paintings the first Thursday night of each month at Birmingham Art Crawl, where he’s normally located at Urban Standard. He also has a show of new works at Crestwood Coffee until Nov. 6 and a show at Lowe Mill in Huntsville that is running until December.

See more of Wilm’s pieces at Paulcordeswilm.com, and get information on the festival at Mossrockfestival.com.