Heart of a lion

George Wehby was just a year away from graduating from Homewood High School when the Ultimate Fighting Championship showed up. 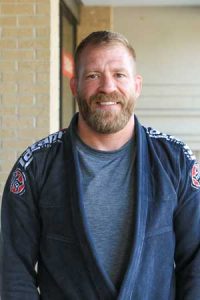 And when it did, things changed.

“It was 1993, and I was taking a Bruce Lee kind of martial arts back then,” Wehby said. “That was when Jon Claude Van Damme and Karate Kid were the way we viewed martial arts in the U.S.”

And then Royce Gracie came on the scene and showed that the little guy could beat the bigger guy in a fight on the ground.

“This Brazilian kid won the whole thing,” Wehby said. “He knew people had never seen grappling before. He used the ground and his body to control the other person like a sandwich.”

It happened again. And again.

“The world was kind of like, ‘What is this, we thought the big guy was going to win,’ It was the weirdest thing I’d ever seen. The grapplers were beating all these guys that were punching and kicking their whole lives,” he said. “Grappling showed the world that you can be the best boxer in the world, but once you get on the ground, all that is useless.”

Wehby was intrigued and impressed.

And the next thing he knew, he’d tried it himself and was sold.

Over the next few decades, Wehby kept up his training as he moved to Virginia, serving in the Marines, as an Air Marshal and in other tactical roles. He ran a martial arts academy while he was there.

“Brazilian Jiu Jitsu is a total body kind of thing,” Wehby said. “You use every muscle in your body — muscles you didn’t even know you had.”

It’s non-violent and not concussive, he said.

“It looks like two snakes fighting on the ground. There’s no real damaging, you’re just trying to lock someone up and control them,” he said. “It’s like chess with your body. You can go 100 percent and not worry about hurting each other.”

Wehby, 40, has been doing martial arts since he was 9, and when he switched to Brazilian Jiu Jitsu, he was sold.

“It’s the only art that can truly deliver on the fact that a much smaller person can take a much larger person based on leverage,” Wehby said.

Other martial arts have different strategies — for instance, Taekwondo is taught more like choreography, and sparring is more of a toe-tag thing, he said. Many of the other types of fighting are mostly based on learning moves and but necessarily trying them full-force on another person, he explained.

In Brazilian Jiu Jitsu, “there’s no kata, there’s no theory. It’s all practical — it’s taught like a sport,” he said.

Because it’s so different from the others, some people love it and some people run away from it, Wehby said.

“To me, by far the biggest benefit you get from it is grit,” he said. “For children, it helps them develop mental toughness. It’s not arrogance, it’s building confidence and setting goals and taking those goals down.”

That’s why he named his school LionHeart Academy.

“A lion heart is the ultimate goal,” he said. “There’s almost nothing more important than developing grit.”

According to the LionHeart website, Brandy, a local mom whose son takes classes at LionHeart, said, “I can not say enough good things about George Wehby and The Lionheart Academy. Not only is he teaching my son great physical skills but he is also teaching him character.”

The academy has a kids’ program and an adult program. Wehby has taught students from toddlers to masters.

But he said for the kids program — called the Little Lions Program — he prefers to teach students from ages 5-12.

“I’ll take a 4-year-old sometimes too if their ability to follow directions is ready,” he said.

In the kids’ classes, “the discipline of Brazilian Jiu Jitsu will teach them patience needed to succeed in life,” according to the website. “The achievements of moving through the ranks of martial arts will boost their self-confidence. And the physical exercise and easy instruction will be just plain fun.”

And at 13, students begin training as adults.

Adults can take either Brazilian Jiu Jitsu or MMA striking, which combines boxing, kickboxing and other martial arts.

LionHeart Academy is located at 2670 Valleydale Road in Hoover.