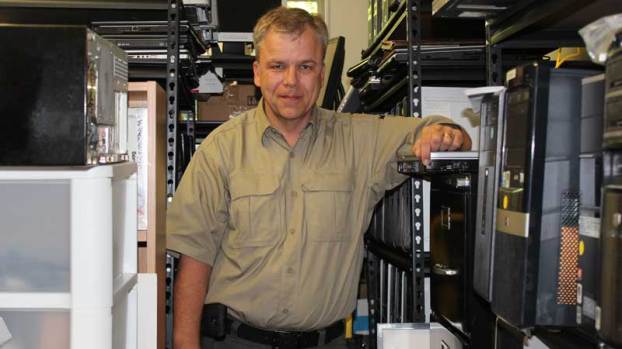 Hoover resident Robin Schultz stands between shelves of computers in the room in which he runs Learning To Be The Light inside the Artists on the Bluff facility.

Learning to be the light

Organization seeking to impact more students in need of computers

When Hoover resident Robin Schultz decided to start refurbishing computers for local students in need five years ago, he knew what he wanted to accomplish, but was uncertain how his efforts would turn out.

Schultz’s idea – to provide students who don’t have access to a computer at home with a refurbished computer for free – came after he met Olivia Lenamond, a student then in Hoover High School’s engineering academy.

“You have to have a computer to be in the engineering academy,” Schultz said. “She said she didn’t have one.”

Schultz, who has done computer work since the 1990s and owns PC Medics of Alabama, also knew Hoover City Schools was ramping up its technology initiatives, such as e-learning, which rely heavily on computer use at school and at home.

“I told Olivia’s grandmother if she could get Internet access, I could provide a computer,” he said. “I thought if we do this for one person, why can’t we do it for others?”

Schultz called it a “perfect storm” of events that led him and Olivia to found Learning To Be The Light in August 2011.

The concept of LTBTL started as a blog called “Let’s GET HOOVER ONLINE” designed to let people know that some HCS students did not have access to broadband, and to secure three major broadband providers in the Hoover area “to provide low-cost Internet access to those families who had students in the Hoover City School system who qualified under the federal Free/Reduced Lunch Program,” according to the LTBTL website.

Without computers, however, the students still faced a disadvantage.

Then, good news arrived. In exchange for Schultz’s company doing network and computer maintenance for Artists on the Bluff, he and Lenamond were offered computer lab space in the facility (formerly Bluff Park Elementary School) to operate LTBTL.

“We’re so lucky to have this,” Schultz said of the space that, although small, serves all of the organization’s needs regarding storage, Internet access and work stations.

Lenamond is at college now, but Schultz and volunteer interns from local high schools continue the work of refurbishing PCs and laptops.

When they receive a computer from someone, they either give the person the hard drive back, or they erase the hard drive according to Department of Defense standards, Schultz said.

“We are never going to give computers with personal information on them,” he added. “We’re going to make sure they’re secure.”

Then, Schultz and his interns install Windows 7 and Microsoft Office on the computers.

The refurbishing process takes about four to eight hours per computer.

As the LTBTL sponsor, PC Medics of Alabama pays for the software for each computer, which costs $12.

“Microsoft is being very generous to sell us these licenses for $6 each,” Schultz said. “We’re happy to pay for it, but if people want to help out on it, that’s great also.”

In addition to giving computers to LTBTL, people can give monetarily to the organization to help cover refurbishing costs, Schultz said. To give, visit gofundme.com/shine.

Currently, LTBTL has 130 PCs and 50 laptops, a vast contrast to the number of students lined up to receive them.

Another stipulation of receiving a computer from LTBTL is a student must have Internet access at home.

“Internet access in a home right now starts at $40 a month,” Schultz said, adding the cost rises to about $60 after the introductory period. “These computers must have Internet access.”

AT&T offers low-cost home Internet service to residents who qualify, according to Att.com.

Schultz said he hopes to raise enough money for LTBTL to become a non-profit organization to help defray costs associated with marketing the organization, a necessary part of spreading the word about LTBTL and its purpose.

“Marketing is incredibly expensive,” Schultz said. “If we could be a non-profit, we could team up with large companies to market. It’s not cheap to become a non-profit.”

And, with non-profit status, LTBTL could accept tax-deductible donations.

Schultz named the organization after Christian group Newworldson’s song “Learning To Be The Light.” Also, the LTBTL business cards are inscribed with “Matthew 5:16” at the top.

“We are proud of our faith, and it’s part of our name,” he said.

The organization’s primary challenge now is not as much collecting PCs and laptops as it is making people aware of their availability to eligible students.

With more time and exposure, Schultz is aiming to conquer that challenge and continue upward progress with LTBTL.

“We want these kids to be on the same level playing field as the rest of the students,” Schultz said. “We’re very proud of what we’ve accomplished here.”

In gear, year after year