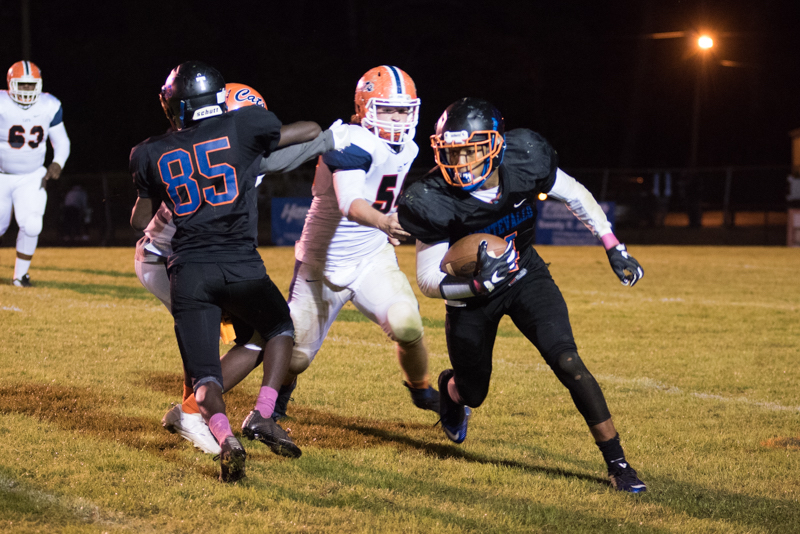 Tre’Shawn Brown will try to help Montevallo get past Southside Selma in the first round of the 3A playoffs this Friday night. Can the Bulldogs get to 10 wins on the year? (File)

Well. That’s that. This past Friday night sewed up the 2016 football regular season in a nice, tidy package, and now we’re moving on. With the end of the regular season, there are now eight county teams, six AHSAA and two AISA, that are alive and playing postseason football. Let’s take a look at how this first week of playoff action is going to shake out.

Oak Mountain snuck into the playoffs on the back of a three-way tiebreaker for fourth place in 7A Region 3 with Thompson and Vestavia Hills. The Eagles are a better football team than their 3-7 record suggests, but nonetheless they are the only three-win team in the 7A playoffs, and are one of only a few across the entire state that was able to punch a playoff ticket. While the fact Oak Mountain has made the playoffs is a feel-good punctuation mark on this season for the Eagles, they are going up against one of the top offenses in the state in the first round. Hewitt-Trussville has not lost this season, and is averaging 46.1 points per game. Oak Mountain has not scored 40 points in one game this season, and this game could be over by halftime. Fun season, Oak Mountain, but it comes to an end this Friday. Hewitt-Trussville 48 – Oak Mountain 21.

The Jags are perfect since their Sept. 23 bye week, winners of five-straight games since that time. Even with an 8-2 finish, however, Spain Park will still take to the road in the first round of the 7A playoffs, as the Jags finished as the No. 3 seed out of 7A Region 3. In the opening round the Jags will go up against a James Clemens team that is averaging 32 points per game and giving up just 15, and two of its three losses have come by eight points or fewer. Spain Park is coming off a season-high 52-point performance against previously unbeaten Minor, and the Jags seem to be back to the same form they were in a season ago when they made an appearance in the 7A state title game. Spain Park is on a heater right now, and you never pick against a team on a heater. The Jags win this one, setting up a rematch with Hoover next week. Spain Park 35 – James Clemens 24.

The Hornets are hosting a playoff game for the first time since 2010, when they lost at home to Cullman in the first round of the 5A playoffs. Since 2000, there have only been four Chelsea teams to win eight regular season games before this 2016 squad, and only one of those years, in 2005, did an eight-win regular season Chelsea team advance past the first round. This Hornet team has made a living off of the backfield play of senior quarterback Matt Marquet and senior running back Zalon Reynolds and a competent, tough defense. Marquet and Reynolds have combined for more than 2,500 rushing yards and 35 rushing touchdowns this season, and have generally been a headache for teams to defend. For this Chelsea team to fare better than some of the Hornet squads to come before them, they have to get past a Bessemer City team that finished the 2015 season with a 6-5 record and then promptly made a run to the 6A quarterfinals.

Bessemer City’s defense is led by Missouri commit Jamal Brooks, and the Purple Tigers gave up less than 20 points per game in the regular season. As far as first-round matchups go, this has the potential to be one of the best in the area. Chris Elmore’s squad hasn’t had to win many tight games this year, as only two of Chelsea’s wins in the regular season came by less than 10 points, but this one has the chance to go down to the wire. Playing at home, with the experience the Hornets have in the backfield, Chelsea pulls this one out. Chelsea 42 – Bessemer City 38.

This Briarwood team has won nine straight games, including a thrilling last-second win over a very good Madison Academy team last week, and is playing great football at the perfect time. However, the Lions will face one of the toughest No. 4 seeds in 5A this Friday night when 7-3 Corner comes to visit. These two teams have not met since 1995, before any of the players suiting up this Friday night were even born, and it could make for a great contest. Corner has only lost three times this season, and has had four of its 10 games decided by 10 points or fewer. The Yellow Jackets are averaging 30 points per game, and if they escaped with a win this week at Briarwood it would not be the craziest result. However, William Gray and J.R. Tran-Reno have this Briarwood offense operating at full-clip, and the Lions defense has given up just 10 points per game over their last nine games. Briarwood is for real, and they’re not going to let this magical season come to an end just yet. Briarwood 31 – Corner 21.

These two teams are meeting for the second time in as many weeks. That’s weird. Sylacauga won the first meeting between the two this past Friday via a 42-28 finish, but it’s essentially impossible to take anything from that game heading into the playoffs. The one glaring stat that stands out from the first game is that Sylacauga had 375 yards of offense, all of which came on the ground. This Aggie team can run the football, and the Calera defense is going to have to corral Sylacauga’s running backs this Friday night if they want to see the second round for the second time in three years. This game could go either way, but it feels like Calera’s season is coming to an end this week. Sylacauga 38 – Calera 31.

Montevallo finished the regular season with a 9-1 record, matching the best regular season record in the Bulldogs’ 86-year football history. This Bulldog team is good, very good actually, but has been emaciated with injuries. Ahmad Edwards and Tavarius Holman are both done for the season, while Daqwan Bryant was held out of the second half of Montevallo’s final regular season game as a precautionary measure. Matthew Allen and Taylor Hall are both out as well, leaving the Bulldogs thin across the offensive and defensive lines. At full-tilt, this Montevallo team could play with anyone in the state, no question, but this group is missing a number of key contributors. As it stands, this senior group, highlighted by Zac Oden, Tre’Shawn Brown, Caleb Chappel, Demetrius Smith and Jackson Hughes, aren’t going to see their prep careers end at home this week against a talented Southside Selma team. This one might be tight until the end, but the Bulldogs will pull it out, getting to 10 wins on the year. Montevallo 21 – Southside-Selma 14.

Cornerstone, winners of eight of their last nine, are headed into a first-round matchup with a 3-7 Clarke Prep team that has been boom or bust this season. In Clarke’s three wins, the Gators have averaged 48 points per game, while in their seven losses they have scored just seven points per contest. Capable of scoring points in bunches against inferior teams, Clarke hasn’t shown it can stay with quality opponents. Cornerstone is, without a doubt, a quality opponent, and the Chargers get their ninth win of the season this year, matching the most in school history. Cornerstone 28 – Clarke 7.

Kingwood made the playoffs thanks to a point-differential tiebreaker with Coosa Valley and Macon-East, and the Lions’ trip to the AISA postseason will be short. Autuaga, the No. 1 ranked team in the AISA, will not have a problem with Kingwood this week. Autauga 56 – Kingwood 7.

By ALEC ETHEREDGE | Sports Writer Stats were not available for the following games at the press deadline Victory Christian... read more