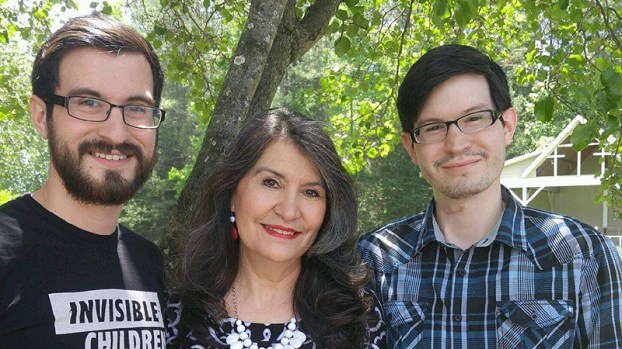 Andrew Davis (right) was diagnosed at the age of 21 with a rare, disabling genetic condition known as Fibrodysplasia Ossificans Progressiva (FOP). Davis is pictured with his brother, Micah Davis (left) and his mom, Lorna Davis (Center).

CALERA – Andrew Davis has learned the importance of taking each day as it comes while also being thankful for the small things.

“You really start putting things in perspective when you find out you have a condition that you could potentially struggle with the rest of your life,” Davis, 29, of Calera said. “While my case is unusual, there have been times I have felt very alone.”

Davis, who is the son of Kingwood Christian School Assistant Principal Lorna Davis, was diagnosed at age 21 with Fibrodysplasia Ossificans Progressiva, a rare, disabling genetic condition causing bones to form in muscles, tendons, ligaments and other connective tissues.

“There isn’t a lot known about this condition as it only affects one out of 2 million people,” Davis said. “I remember looking up on Google what the condition was after I was diagnosed and being really shocked that I had lived a seemingly normal life and I was now living with this.”

While Davis was born with his big toes shorter than the other toes on his feet, it wasn’t until he noticed a bulge on his neck at age 20 that prompted him to visit with doctors. After a misdiagnosis and series of tests, Davis was officially diagnosed with FOP.

Davis has been considered an FOP “anomaly” after visiting with Dr. Fred Kaplan at the University of Pennsylvania.

“Most people with FOP are confined to a wheelchair, and have lost a lot of their mobility,” Davis said. “With this condition, soft tissue in the body can easily turn to bone, so you have a lot of people who are somewhat frozen in a position for the rest of their life. I am unusual in the sense that I am still able to walk around, I can still feed myself every day, I am able to drive a car, have a job, and do a lot of things that a lot of people dealing with this condition are not able to do.”

Kaplan has been researching FOP since the 1980s, and has been working with Davis since being diagnosed.

This year, Davis traveled to the University of Pennsylvania to meet with Kaplan and others to receive testing to determine what might be different in Davis’ genetic code that causes him to have a mild case of FOP.

“Right now they are trying to find out what is it about me that makes me different than most who have this condition,” Davis said. “They have not been able to pinpoint it quite yet, but they are doing tests in hopes they can figure it out.”

Davis was among 40 individuals selected to participate in a study to see if there is any natural progression with the condition over a period of three years. “I will have tests taken once each year for three years as part of the study,” he said.

Davis was also invited to participate in an FOP drug development forum in Boston Oct. 23-24 where he was able to meet with others diagnosed with FOP.

“The forum was where a bunch of researchers and pharmaceutical companies come and they learn about advancements in treatment and advancements in findings that others have done regarding FOP,” Davis said.

“There were two patient panels. One panel was a progression panel of individuals ages 5 to 47 who have FOP, and they shared their stories. I was part of the second panel which consisted of people who were mildly affected and had a variance of the gene. After meeting with others who are affected I was able to see that that I am not alone and there are others out there living with this condition,” Davis said.

Although Davis hopes there will one day be a cure for FOP, he spends his time and energy trying to educate others about the condition.

“Since it is so rare, not a lot of people know about it so I hope I can share my story with others who might be going through something similar,” Davis said. “I am thankful that so far my condition is very mild. My outlook on life has definitely changed though and I consider myself to be very blessed.”