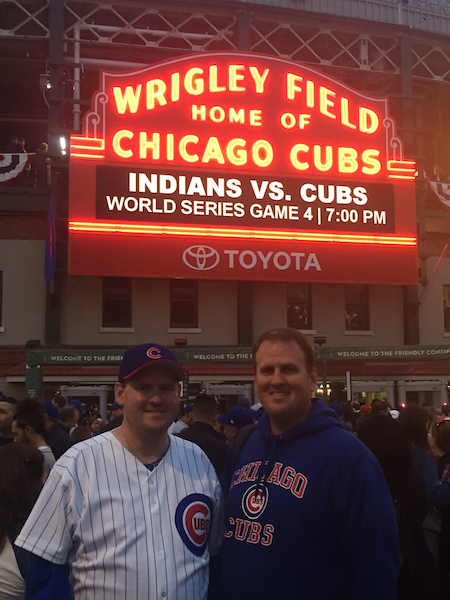 By CHRIS MEGGINSON / For the Reporter
CHICAGO – Ever since their playing days for the 9-12-year-old West Jasper Cubs in Bay Springs, Mississippi, Calera Middle School baseball and football coach Mark Windham and his twin brother, Marty, have been Chicago Cubs fans.

So, when the Cubs won the National League pennant for the first time since 1945 on Oct. 23, and advanced to the World Series to face the Cleveland Indians, the Windham’s knew they had to go to Wrigley Field.

On Saturday, Oct. 29 both were back in Cubs jerseys for Game 4 – Mark in his blue Mark Grace jersey and Marty in a classic Cubs pinstripe – walking the streets of Clark, Addison and Waveland for the biggest weekend of baseball the ivy covered outfields have seen in 71 years.

“It’s a once in a lifetime experience,” said Marty, who lives in Hattiesburg, Mississippi. “Ever since we were little kids watching Cubs games on TV, it’s a dream come true.”

Marty and one of their cousins drove to Chicago on Friday to catch Games 3, a 1-0 Indians’ win. Mark flew up from Atlanta on Saturday morning for Game 4, which the Indians took, 7-2. Neither had tickets, but merely wanted to experience the atmosphere of a World Series in Wrigleyville – the neighborhood surrounding Wrigley Field – which saw hundreds of thousands fill the streets to be part of the moment.

“Even though they didn’t win, it was still worth it just for the experience to be here,” said Mark. “Just seeing the crowds, going through it, the Cubs being in the World Series and to be able to say, ‘I was a part of it,’ you can’t take that away. I hope it happens again next year, and let’s make another trip.”

It was yet another check mark on Mark’s baseball bucket list, which included winning a state title as a coach in 2005 at Shelby Academy, attending the College World Series in 2009, and seeing the Cubs play in spring training, on the road in Atlanta several times and at home four times, including catching an Alfonso Soriano home run ball in 2011.

The brothers enjoyed nearly every moment of the short trip together from stepping off the redline L train to the sight of Wrigley, taking photos in front of the iconic signs, grabbing lunch at Wrigleyville Dogs and high fives all-around when the Cubs took a 1-0 lead in the first inning.

But when Chicagoland native Jason Kipnis hit a three-run home run to give the Indians a 7-1 lead in the top of the seventh, the first World Series three-run home run by an opponent at Wrigley since Babe Ruth’s called shot in 1932, it was time to beat the exodus of fans to the train. First, they took in one more must-do moment at Wrigley. They stopped behind the right field foul pole and Mark pulled out his phone to video the entire stadium and crowd on the street join actor Vince Vaughn in singing “Take Me Out To the Ballgame” during the seventh inning stretch – a Cubs tradition.

“It’s definitely not the outcome we wanted, but I still wouldn’t trade it for anything. I’d do it all over again. It’s just a once in a lifetime experience,” Marty said. “I was here for both games they lost, maybe now that I’m leaving, they’ll win the next three.”

The Cubs went on to beat the Indians, 3-2, in Game 5 the next night to push the Series back to Cleveland for Game 6 Tuesday, Nov. 1. Game 7, if necessary, is scheduled for Wednesday, Nov. 2 in Cleveland with a 7:08 p.m. CT first pitch, broadcast live on FOX.