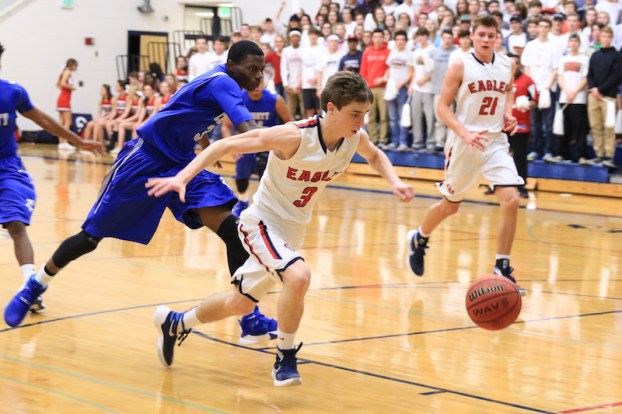 The Oak Mountain Eagles’ basketball team will look to rebound after a heartbreaking loss to Hoover in last year’s 7A Elite Eight. Will Stephenson will be the leading returner for this season’s squad. (File)

NORTH SHELBY – Flashback to Feb. 23, when the Oak Mountain Eagles’ basketball team found themselves tied at 39 in an Elite Eight matchup with Hoover and a trip to the Final 4 on the line. The Bucs’ Wes Banks ended up draining a three as time expired in the game, ending the Eagles’ magical run at a championship.

That game might be in the past now, but it is still very much on the minds of this year’s returnees, including head coach Chris Love who is heading into his eight year as the team’s head coach.

“To be that close to the Final 4 and a state championship is heartbreaking, especially considering we didn’t play our best game that day,” Love said. “Having that moment on the tip of our fingers and then losing it really has us motivated to get back.”

If they’re going to duplicate last season’s success, they’ll have to do it without First Team All-County Forward Payton Youngblood. Youngblood averaged 11.5 points per game, 7.1 rebounds per game and two assists per game during his senior year.

They also lost the likes of Wyatt Armstrong and Gabe Haynes who contributed good minutes and scoring.

There may be a lot to replace on this 2016-17 Oak Mountain squad, but the return of senior Will Stephenson will be one major piece to the puzzle. Stephenson, a Third Team All-County point guard last season, averaged 9.7 points per game, 2.8 rebounds per game and 2.5 assists per game as a junior.

“He’s had a really good offseason and will be a key to this year’s team,” Love said. “He’s not only good at scoring and dishing the ball to others, but a tremendous rebounder as a 6-foot guard.”

Kris Hutchins who got some good playing time last year will most likely be playing alongside Stephenson at the two spot.

“We lost a lot, but honestly I think we have a good nucleus of guys coming back,” Love said.

This includes senior Wyatt Legas who is also a quarterback on the football team, as well as two 6-foot-7 big men to hold down the paint in Josh Pierce and Christian Stockdill.

“We like both of our (big) guys,” Love said. “They will both get some solid minutes this year and contribute down low. It’s exciting because we haven’t had too many big guys over the last several years and now we have two on the same team.”

Love said this year’s team will be a little different than last year’s for two reasons: They’ll have more size and they’ll be more athletic, which he says will help the team create more pressure defensively.

The “nuts and bolts” of Love’s team will be playing hard defensively, not turning the ball over and assuring rebounds.

“We like to push it offensively, but as long as we are doing those three things, then our team will be just fine this year,” he said.

Another major task ahead for the Eagles this year is their move to Area 6 in Class 7A. Oak Mountain is moving to a region that features Spain Park and Mountain Brook, who have combined to make it to the past three Final Fours with one state championship from the Spartans in 2013.

“We’re excited to be playing those teams,” Love said. “People have said we are going to struggle having to take on those teams, but honestly that will help us play harder and prove more. It is very much a challenge we are looking forward to.”

Love said his team just has to understand what it will take to get back to where they were last year and the “effort and intensity” have to increase, saying guys like Logan Sheaffer who is a good teammate and “practices hard as heck” should be the example for everyone.

Oak Mountain will open their season on the road against Stanhope Elmore on Nov. 15.