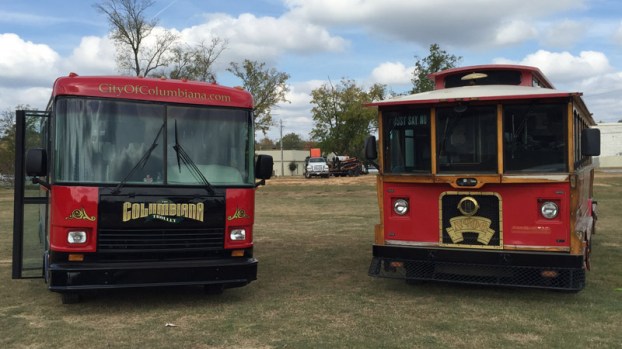 The new trolley (left) was painted to match the exterior of the first trolley (right). (contributed)

COLUMBIANA– The City of Columbiana recently doubled the size of its public transit system. Columbiana, which possesses the only public transportation and trolley system in Shelby County, recently added a second trolley.

“We’re getting more and more special events here. We would have to interrupt the original trolley’s route for it to handle them. The second trolley is going to both run the route and run for special events, but it covers the first trolley when it’s being used for events,” said Mayor Stancil Handley.

Handley said that the new trolley also serves as a back up, in case the original trolley breaks down.

“We’ve only been running the second trolley for two weeks, and we’ve already had a couple of occasions where we’ve had both trolleys running at the same time,” said Handley. “All vehicles break down. If we had a break down before, we just had to pull the service. Now, we’ll have continuous service.”

According to Handley, the new trolley is actually a bus that has been painted to match the exterior of the original trolley. The paint job was supplied by Tim Wilson and his son, Jeremy, from Wilson Paint & Body.

“The city is beholden to them for doing that. The trolley looks absolutely beautiful,” said Handley.

The first trolley was added two years ago, and was bought by the city from Charleston. The interior of the trolley has wooden seats and brass poles.

The new trolley has the same interior as a regular bus. However, Marketing Director Elizabeth Smith said the new trolley makes up for its lack of authenticity with comfort.

“For longer trips, the cushioned seats would definitely be more comfortable,” said Smith.

Handley mentioned that the original trolley has developed its own personality, and he looks forward to seeing how the new trolley will adapt to Columbiana life.

“The first trolley has a friendly personality. When people see it, they smile. The second trolley is the new kid on the block,” Handley said.

Handley was originally inspired to introduce the trolley system to Columbiana when he first ran for mayor. During his time campaigning from door to door, several residents told him that they had never been around the city due to a lack of private transportation.

There are currently 22 trolley stops, which are designated with signs, and the trolley’s route around the city takes approximately one hour. Fare for the trolley costs 25 cents for an unlimited amount of times per day.

Handley said that the reactions of Columbiana residents to the new bus have ben overwhelmingly positive.

“The people of Columbiana have taken to it and love it. It’s given a lot of people freedom that they didn’t have before.” Handley said. “I have not heard a single negative comment. Everyone has been very pleased with it. Columbiana is actually identified with the trolley system now. This just another statement toward the fact that Columbiana is unique.”

County police departments to participate in ‘No Shave November’