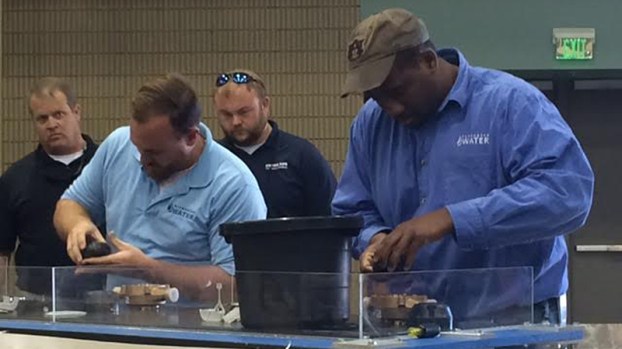 Brent Fenley (left) and Herb White (right) competed in Meter Madness, a competition held at the annual American Water Works Association state conference for the Alabama and Mississippi division. Fenley is a crew leader with the Alabaster Water Board and White is a meter reader. (Contributed)

Mastery of their craft: City employees place third at competition

ALABASTER – Two employees with the Alabaster Water Board recently placed third in a fast-paced competition where individuals race to assemble a water meter.

This year’s conference was held in Montgomery Oct. 9-11.

Fenley, a crew leader, and White, a meter reader, were two competitors selected to represent the Alabaster Water Board as they battled against roughly 10 teams from Alabama and Mississippi.

“It is very fast-paced,” White said. “I have been practicing with a meter for about a month, but it was a lot different practicing by myself. Once I was at the competition it was totally different because people are looking at you as you put the meter together, and it is very competitive.”

Meter Madness participants are given a bucket of parts and must work quickly to assemble a water meter.

“The tricky part about the competition is they give you more parts than necessary to build the meter,” White said. “When you dump the bucket out on the table you have a lot more parts than you will need. You really have to stay focused and just remember which parts go where, which is pretty hard when some of these competitors are putting these meters together within seconds.”

The two teams with the fastest times advance to compete at the national level. The national competition will be in Philadelphia in June 2017.

At the state competition, Birmingham and Montgomery teams finished with times ranging from 40-50 seconds, edging out Alabaster’s top times of around 58 seconds.

“Meter Madness is all about speed,” Alabaster Water Board manager Laura Koon said. “It is a great opportunity for our employees to interact with others in the field and have fun competing.”

Koon said those interested in participating in Meter Madness are provided with a “test” meter to practice with prior to the competition.

“We get the test meter out and we hold a competition in our office for the two fastest individuals to compete at the annual conference,” Koon said. “Each year, the type of water meter they must assemble changes. This year we had five try out. The top two get to attend the conference which isn’t only about the meter competition, but also gives them the opportunity to attend classes, meet vendors and establish contacts.”

Koon said meter participants are given two chances during the competition to put the meter together.

“The real challenge is putting together a meter when you have a room full of people watching,” Koon said. “The stress of having people watch you and working with small parts and pieces is easy to get people rattled.”

“These guys in the field are the unsung heroes,” Walters said. “People don’t always think about them when they turn on the faucet every day. This competition allows them to go and compete and meet other individuals in the field. They also get to learn a lot of different things and bring back what they learned to the other associates, which is just invaluable. It enriches their lives and makes the Water Board that much stronger.”