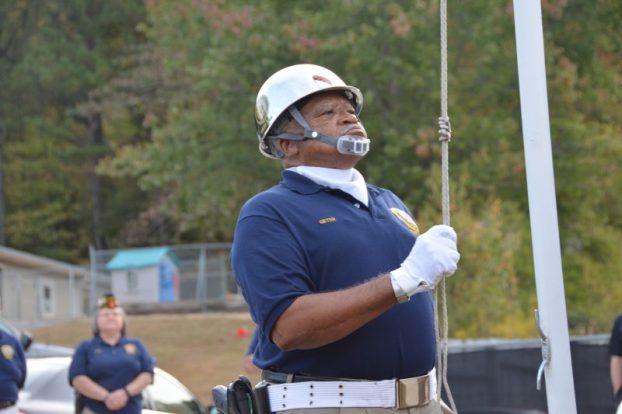 As the flag was lowered, the “Retreat” bugle call played, said Frank Lakotich, a trustee and Honor Guard member. He said “Retreat” was played to signal the end of the official duty day.

It has grown to become the bugle call played when lowering a flag.

As the flag was being raised, the “Reveille” bugle call played. “Reveille” is a morning bugle call that was originally played when troops gathered to start the day.

Over time, Lakotich said it’s grown to become the bugle call played when raising a flag.

“Bugle calls eliminated confusion,” Lakotich said. “Each bugle call was a signal of what action to take.”

Empire Autohaus owners Karen and Alan Apel learned that Post 555 performed flag retirement ceremonies after attending a flag raising ceremony on Aug. 23 at Select Management Services, which is located across the street from Empire Autohaus.

“Our flag was torn and tattered and we wanted to make sure we replaced it the right way,” Karen Apel said. “It’s great to honor our country. Although we might not agree with a lot of what’s going on in our nation right now, we still need to stand together as one country.”

Empire Autohaus, located at 270 Yeager Parkway, is a maintenance and repair shop with a focus on European vehicles. Karen Apel said the shop does a lot of work on German cars and some British cars. The shop also offers restoration services.

“We’re a dealer alternative,” Karen Apel said. “People also come to us when their vehicles are just out of warranty.”

For more information about Empire Autohaus, go to Empireautohaus.com.