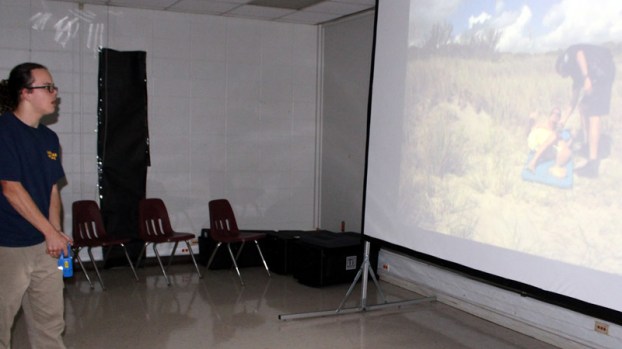 “Before, we could only talk to them about the use of force,” said Griffin. “In a law enforcement career, they need to know how to use weapons and to respect weapons. This training simulator shows them how quickly things can change and escalate when responding to various situations, such as traffic stops or domestic violence incidents,” said Instructor Gary Griffith.

The training simulator involves the use of a projection screen and mock weapons. The mock weapons simulate the use of pepper spray, tasers and guns. Interactive video scenarios are utilized to teach students when and how force is used appropriately.

Griffin said that the program has over 600 scenarios that are based off of events that have happened in the past. Each year, 35 new scenarios are added to the simulator.

“Being mentally prepared is probably one of the most important things that you can be in law enforcement. It will allow students to get a better look at what law enforcement is like,” Griffin said.

According to Griffin and Principal Zach McWhorter, the Ti Training System serves as a way of recruiting new students for the Public Service Academy.

“We felt like it would be a great tool for our public service program. A lot of research was involved,” McWhorter said.

No police departments in Shelby County currently have any kind of simulation software to train new officers. However, law enforcement officers and firefighters who work in Shelby County can now train with the simulator.