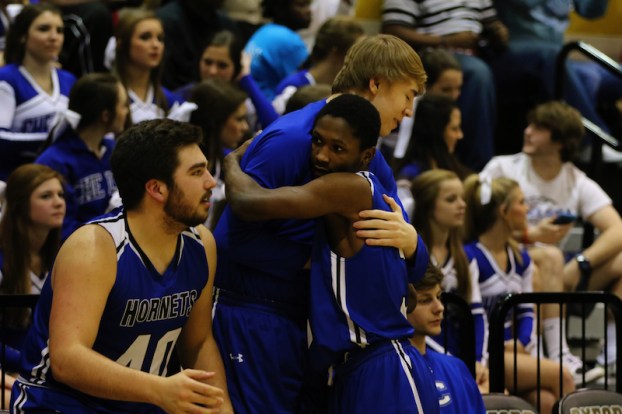 CHELSEA – The Chelsea Hornets have high expectations as they head into the 2016-17 basketball season and for good reason. Chelsea has won back-to-back area tournaments and made an appearance in two straight Sweet Sixteens.

That being said, as much success as these pesky Hornets have had the last couple of seasons under two-year head coach Nick Baumbaugh, they are coming into this season with a little bit of a broken heart to mend.

In last year’s Sweet Sixteen matchup with Center Point, Chelsea held a 49-42 lead with less than two minutes to play, and with time winding down still held a 51-48 lead before Center Point’s Caleb Cook drained a buzzer beating three to send the game to overtime. In overtime the Eagles would end up hitting another last second three to win by a final of 59-56.

“That was a frustrating game,” Baumbaugh said. “I’ve watched the last 10 seconds of play at least 15-20 times second guessing what I decided to do, it’s definitely something I’ve dwelled on, but something to learn from.”

Baumbaugh said that game will end up being helpful in the long run and motivate this year’s squad. He noted if his team is struggling in practice or a game he won’t hesitate to bring up the game to let the guys know they need to pick up the intensity.

After winning the area tournament for the first time since 1986 in 2014 and winning a second consecutive area tournament last year, as well as going to back-to-back Sweet Sixteens, Baumbaugh’s expectations have changed since he first arrived.

“Originally the goal was to make it to regionals, but the last two years have changed that,” he said. “I have no doubt that my team this year can get back to the Sweet Sixteen and even the BJCC.”

If that is the ultimate goal this year, they will have to do it without Second Team All-County guard Aaron Washington, who averaged 15.6 points, 4.1 rebounds, 1.3 assists and 1.6 steals last season. He also set a Chelsea school record for points in a season, three-pointers made and attempted, three-point shooting percentage and free throw percentage.

“He’s a tough guy to replace and it just means we are going to have to find 16 points somewhere,” Baumbaugh said.

While Washington will be a tough talent to replace, this 2016-17 Hornets squad will return four starters and eight seniors lead by Joseph Lanzi, who averaged 10.5 points, four rebounds and two assists per game last year.

Another key returner is senior Matthew Marquet, who is also the quarterback for the football team. Last season he averaged 11 points and five rebounds for the team.

Chelsea will return about 30 points per game with those two starters back as well as the other returning starters Sam Towery and Josh Hanna. A new face Baumbaugh is excited to get on the court is Tyler Coleman who is coming off of junior varsity, but expected to start.

“We have a great group of guys this year and it’s going to make it much more difficult for coaches to game plan against us when we have such a collective group effort,” Baumbaugh said.

Baumbaugh said the main goal for this team is to buckle down defensively because being sound on defense is what will win them games.

“Our strength needs to be on the defensive end,” he said. “We spend 10-20 minutes every practice just working on defensive fundamentals because we have to hold teams under 60 points.”

Offensively, Baumbaugh said they aren’t a run and gun team, but more of a pass and cut kind of squad. He knows they will have to look for other teams to make mistakes defensively and take advantage.

Chelsea has also moved into area 8 of Class 6A, which features the likes of Helena and Pelham.

“Those are two good teams and I am friends with both coaches,” Baumbaugh said. “I’m sad one of us won’t play in Sub Regionals, but that just goes to show how important winning the regular season area championship is so we can go ahead and lock that position up,”

The Hornets will begin their season Nov. 10 at home against Vestavia Hills at 7:30 p.m.

By BAKER ELLIS / Sports Editor HOOVER – The Chelsea Lady Hornets did not have a girl place in the... read more