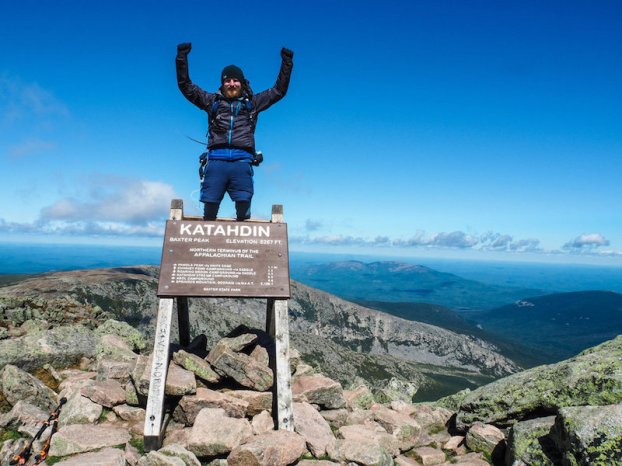 Davis Grimes celebrates at Mount Katahdin in Maine after completing his 132-day journey on the Appalachian Trail. (Contributed)

Eleven years ago, a young Boy Scout, Davis Grimes, came to the door of Coke and Molly Clark selling popcorn for his troop.

When their dogs greeted him, he immediately reached into his pocket and pulled out his “dog sitter” business card. He served them that way until he left for college and turned over his “business” to his three younger siblings.

Grimes graduated from UAB Department of Music in April 2016 and set out on a major goal before seeking a job—to hike the Appalachian Trail from its southern end on Springer Mountain, Georgia, to its northern end at Mount Katahdin, Maine.

Spanning 14 states and a 2,190-mile stretch of mountainous terrain, Grimes succeeded in this challenging adventure in 132 days. Grimes raised funds via Gofundme to purchase hiking equipment and a camera, so that he might share the trip all along the way with his father.

Grimes shared a video presentation and his personal story.  ”My father was diagnosed with Hodgkin’s when I was 2 years old. I am told that I learned to walk in the hospital treatment rooms.”

An Eagle Scout at the age of 15, Grimes and his father began to dream of hiking the Appalachian Trail together when he graduated from college and prior to beginning med school.

“However, my father was diagnosed with secondary radiation-induced soft tissue sarcoma, resulting from the treatments for Hodgkin’s, while I was a freshman in college. I decided I would get out there and do it for him—complete the trail in homage to my father and his dream.”

His father was able to hike with Grimes about 11 miles, with a goal to make it to Neels Gap, but it was clear after the first day he wouldn’t be able to continue, Grimes said, adding, “We extracted him on the north side of Sassafras Mountain.”

Grimes’ father was in Houston receiving further treatment as he spoke on Oct. 11.

As a Boy Scout, Grimes developed a love for many outdoor activities that stood him well on this arduous adventure, but didn’t prevent him from encountering the challenges of the trail itself.

Throughout the trip he suffered from everything from sprained ankles to giardia, an intestinal parasite. The mental and emotional toll of being away from home for such an extended period proved the most difficult.

He began his trip on the same day as five other individuals. Hikers on the trail all assume trail names. Grimes was known as Highlander and his first traveling mates were Futuro, Berkley, Guru, Flint and CC (Captain Carrie), their female leader, all who became Bear Squad as a trail family. Bear Squad continued the trail together to the Smoky Mountains.

Along the way they met other hikers, everyone with a story of their own for hiking the Appalachian Trail, for example Snail, from Germany and Caterpillar from France.

“One of my real joys on the trail was the view that I had each spring morning along the way, like the sunrise view that greeted me after spending my first night alone on the trail camping at Big Bald Mountain—the loftiest point between the Great Smoky Mountains and Roan High Knob,” he said.

By LAURA BROOKHART / Community Columnist Helena’s Beautification Board is once again adding festive character and seasonal color to our... read more