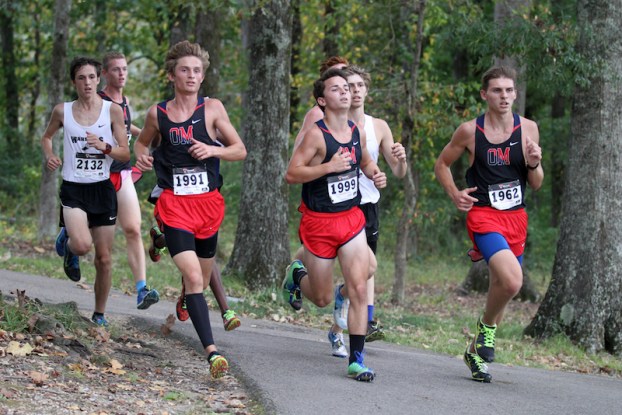 HOOVER – Cross country sectionals kicked off on Thursday, Nov. 3 with several county teams competing at Veterans Park in Hoover to try and punch their ticket to state.

Out of the three boys and girls 7A teams from the county taking part, only the Oak Mountain boys and Spain Park girls were able to qualify for the state meet on Nov. 12.

Girls and boys from Spain Park, Oak Mountain, Thompson, Hoover, Mountain Brook, Vestavia and Tuscaloosa County competed against each other in the 7A Section 3 meets, which is quite arguably the toughest section in the state.

The girls race was extremely close with Mountain Brook, Hoover and Spain Park taking the top three spot. Timing wise there was only a five-minute difference between the first place Spartans and fourth place Vestavia Hills, which actually had an overall time that was 12 seconds faster than Spain Parks.

When it came down to the scores, however, the Lady Jags held an 85 to 99 advantage over the Lady Rebels. Spain Park was led by senior Isabel Caddo, who finished second overall in the meet with a time of 19:54. Fellow senior Mary Katherine Tedder also paced the Jags with a twelfth place finish and a time of 20:20, while freshman Holland Lidikay snuck inside the top 20 with a time of 20:44.

Anna Grace Morgan was the top overall 7A girls runner with a time of 18:51 for Mountain Brook, who placed five girls in the top 10 on their way to a dominating performance and total score of 23, which was 33 points higher than second place Hoover.

In the guy’s race Oak Mountain was the only Shelby County boys team to make it out of the sectional with their third place 78-point finish behind second place Mountain Brook, 49 points, and first place Hoover, 42 points. Vestavia Hills just missed out on state, finishing nine points lower than Oak Mountain with a total of 85.

Senior Caleb Van Geffen led the Eagles with a time of 16:54, which was good enough for ninth place, while senior teammate Cole Stidfole, one of the state’s best runners, finished three seconds later, giving Oak Mountain two top-10 finishers. The last top-20 finisher for the Eagles was Chris Tate, who came in with a time of 17:18, good enough for 13th.

Thompson finished sixth overall in the team standings with 149 points, but Warriors’ sophomore Brandon DeMar Lee was the county’s highest 7A boys finisher with a time of 16:54, good enough for eighth place.

Corey Burroughs looks for room to run on Oct. 27 in Thompson’s final regular season game of the year against... read more