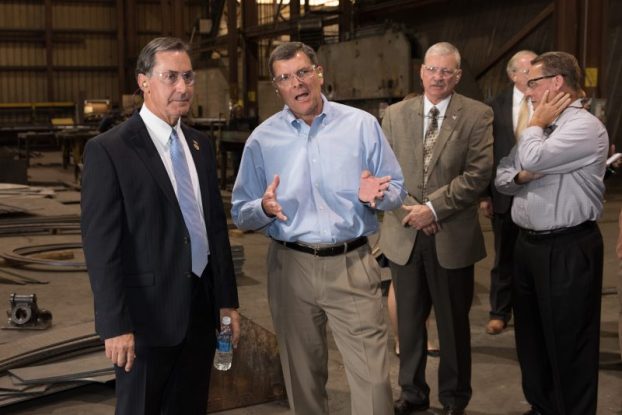 PELHAM – As U.S. Rep. Gary Palmer, R-Vestavia Hills, stood in a room full on engineers on Tuesday, Nov. 1, he shared with them that he used worked at a manufacturing plant at night earning less than $6 per hour to help pay his way through school.

“Physically, that was the hardest job that I think I’ve ever had,” he said. “When I got home after that first night I think I just laid out on the floor and passed out.”

“I’m proud of what you guys are doing,” Palmer said while talking to employees at ProcessBarron. “I’m a big believer in manufacturing.”

They manufacture, install and maintain their equipment for their clients. The company began as Process Equipment in 1981, and purchased Barron Industries in 2002. The two companies merged to become ProcessBarron.

Before touring the facility, Palmer answered questions from ProcessBarron employees.

When asked about the nation’s current health care system, Palmer said that he would continue working to repeal the Affordable Care Act.

“We will put the individual in charge and it won’t be tied to your employer,” he said. “When you leave, it leaves with you.”

Palmer said he envisions a health care system where everyone has a nontaxable health savings account with funds that will roll over to the next year if they aren’t used.

When asked about his stance on fair trade, Palmer said he is for it as long as all parties agree to be good neighbors.

ProcessBarron CEO Ken Nolen said fair trade is one of the biggest issues facing the company. He said sometimes industrial clients put pressure on them to purchase Chinese facbricated products when it’s a product that ProcessBarron manufactures. The reason being that China sells the products at a price either below the price charged in the U.S. or below its cost of production.

“That’s not being a good neighbor,” Palmer said.

During the tour, Palmer got to see the company’s manufacturing plant.

The company has two offices, one at 2770 Welborn St. in Pelham and another in Pinson. ProcessBarron has 250 employees between the two sites, but Ashley Doyal, vice president of sales and marketing, said as many as 600 people are on payroll during the company’s busy seasons. Doyal said the additional employees are contractors.

HOOVER – Spain Park’s girls basketball program is in the midst of a transition that could yield adversity now but... read more