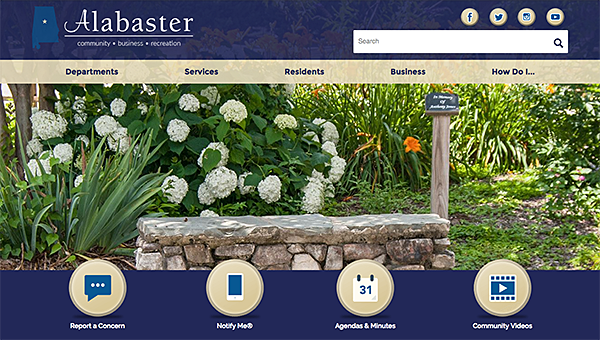 The city of Alabaster launched its new website on Oct. 25. (Contributed)

‘Report a concern’ upgraded on new city of Alabaster website

ALABASTER – Local residents who report a concern through the city of Alabaster’s new website will be able to more easily track an issue after they bring the matter to the city’s attention, according to the city’s IT director.

The city launched its new website on Oct. 25 at Cityofalabaster.com after approving an agreement with the CivicPlus company for the new site in April. Patrick Johnson, the city’s IT director, said the city has been working for the past several months to set the site up to ensure it meets the city’s needs.

“It was a long process, but it’s a very customizable system and we wanted to make sure we got it right,” Johnson said. “We are really excited about it. We are always looking for ways to help and communicate with the residents.”

One of the major changes on the site is the new “report a concern” system. The old website had the feature, but it ran on a different system, Johnson said.

Through the old system, reports submitted through report a concern were routed to a single Alabaster employee, who forwarded the information to the correct city department. While the old system allowed the city to address issues, it didn’t allow much communication back to the citizen who submitted the issue, he said.

With the new system, users will be notified by text or email of the status of their report as it progresses.

“Before, it was a very one-way communication,” Johnson said. “Now, say if someone reports a pothole, they will receive a notification telling them when it’s scheduled to be fixed.”

The new report a concern feature also has benefits on the city side, Johnson said. Throughout the year, the city will be able to track each type of report, and will be able to analyze the data at the end of the year. The system also plots projects on a map, which will allow city leaders to stay up-to-date on work taking place in the city.

The new site also features the Notify Me program, which allows locals to sign up for certain types of alerts from the city, whether it be train issues, community events or City Council agendas. City Council agendas and approved minutes are also available through a link on the front page, as is an up-to-date community calendar.