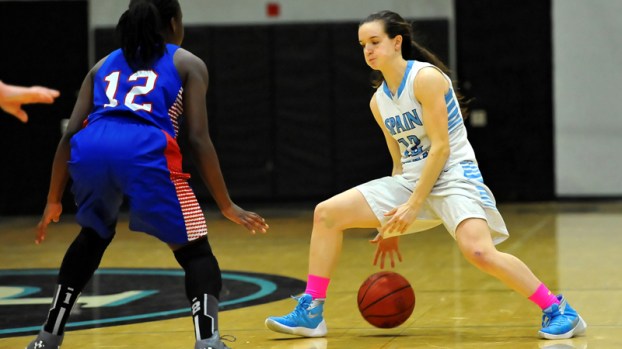 Claire Holt has started for Spain Park’s girls basketball team since her freshman season and will be the team’s most experienced player this year as a junior. (File photo)

HOOVER – Spain Park’s girls basketball program is in the midst of a transition that could yield adversity now but unprecedented heights in the near future.

Last year’s team finished with a 15-14 record. Before that, coach Michael Chase’s previous three teams had won no fewer than 23 games—including a school-record 26 wins in 2013-14—and claimed three consecutive area championships.

The goal for this year’s team is to return to those lofty standards, but there will be a temptation to look to next season, when a large group of juniors will reach full varsity maturity.

“We want to be successful this year, but we know we have a chance for a lot of success in the future,” Chase said.

No matter the strength of his team, Chase said he remains committed to scheduling difficult competition in order to help the Jaguars improve.

“We’re going to play these good teams,” he said. “It’s my job to get the girls up to par to be able to play with them.”

Chase also makes a point to schedule teams with various styles so that his players gain experience that can prove useful later in the season and in the playoffs.

Junior guard Claire Holt has been a member of the varsity squad since her eighth grade year and a starter since her freshman year, and is the team’s most experienced player.

Holt is a shooter/scorer who can run the point when needed and plays effective defense.

“She sets the table for us,” Chase said.

SPHS will rely on a balanced attack.

“I think we have five or six players who could lead us in scoring any given night,” Chase said and added he thinks the balance makes the Jags more difficult to prepare for.

A 21-year veteran, Chase said his coaching style has changed along with the make-up of the players he works with.

“These things used to come through with how you coach your team,” Chase said. “Nowadays, you almost have to plan it.”

Spain Park begins its season by hosting Midfield on Nov. 10. The Jaguars host a tournament Dec. 21-23 with the likes of Thompson, Mountain Brook, McAdory and others participating.

A full schedule and roster can be found at SpainParkAthletics.org/girls_basketball.

HOOVER – The story of the offseason for Spain Park’s boys basketball team may have been the transfer of a... read more