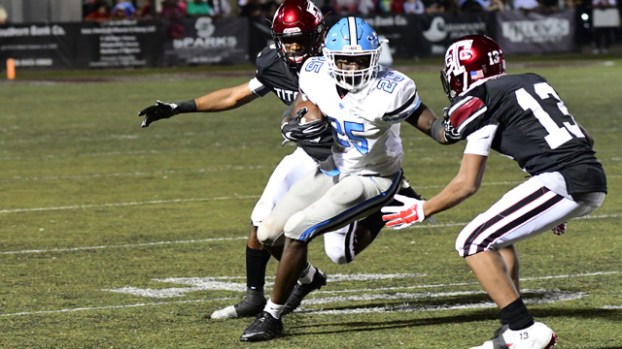 Larry Wooden and the Spain Park Jaguars fell at James Clemens in the first round of the Class 7A state playoffs on Nov. 4. (File)

Spain Park falls at James Clemens in first round

MADISON – Four turnovers contributed to Spain Park High School’s season ending with a 21-12 loss at James Clemens on Friday, Nov. 4 in the first round of the Class 7A state football playoffs.

JCHS struck first with a touchdown run with 5:14 on the clock in the first quarter.

Another first-quarter touchdown run and extra point made the score 14-0 with 15 seconds remaining in the first quarter.

Then, Spain Park made a run, scoring 12 consecutive points.

First it was a 26-yard field goal by Cole Starr with 7:24 left in the second quarter to get the Jaguars on the scoreboard.

Then, with 2:58 on the clock, Braxton Barker passed to Jalen McMillan for a 53-yard touchdown pass, but the point-after was missed.

Starr added another field goal from 20 yards out with 16 seconds left until halftime to cut the lead to 14-12.

But that’s as close as the Jaguars would get. They were unable to score in the second half, while a 58-yard touchdown run with 6:18 remaining in the third quarter gave James Clemens some breathing room.

Spain Park turned the ball over four times (three interceptions and one fumble) to James Clemens’ one turnover, but an inability to run the football effectively also played a part in Spain Park’s loss.

The Jaguars rushed for only 21 yards (Clements had 147 rushing yards) though Barker completed 27 of 53 passes for 310 yards.

D’Arie Johnson was Spain Park’s leading rusher but could manage only 16 yards on 11 carries.

By ALEC ETHEREDGE | Staff Writer LOXLEY – The Westminster School at Oak Mountain continued to show why their cross... read more