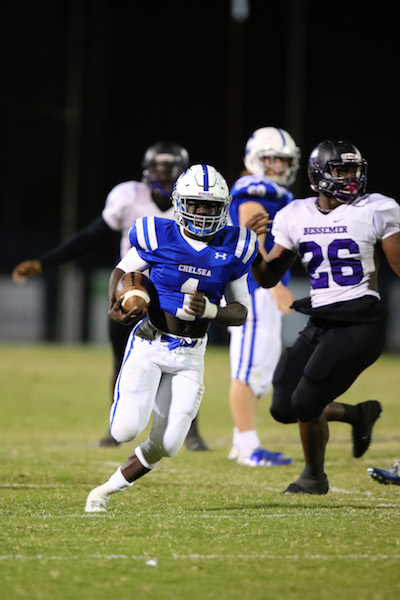 CHELSEA – The Chelsea Hornets went into their playoff matchup with Bessemer City on Friday night, Nov. 4 looking for their first playoff win since 2007, unfortunately early field position woes kept that dream from coming to fruition as they fell in a heartbreaker 31-23.

As previously mentioned he story of the beginning of the game was field position. Chelsea couldn’t do anything with the ball offensively on their first two drives, which set up punts that were less than stellar. Bessemer City capitalized on the short field and scored 14 points in the first quarter to Chelsea’s zero.

During that stretch Senior running back Zalon Reynolds went down with what appeared to be a pretty severe ankle injury. He was limping on the sideline and between plays the rest of the night and even though it was obviously bothering him he toughed it out and didn’t let it show.

Finally, on their third drive of the game it looked like they found something. Senior quarterback Matthew Marquet led the Hornets on a beautiful 77-yard drive. During the drive he had a 21-yard run and found senior wide receiver Jay Vickers twice, once for a gain of 21 and the other for a 31-yard touchdown.

The lead was now cut to 14-7, but that was short lived after a long kick-off return by the Tigers set them up with favorable field position yet again. They eventually scored on a 9-yard touchdown pass to go up 21-7, which ended up being the halftime score.

Bessemer City came out of the locker room and did what they had been doing all night, short quick passes and short powerful runs. They controlled the line of scrimmage, while the Chelsea defense played off the line and failed to adjust to the Tiger’s game plan.

Chelsea finally woke up when Reynolds broke loose for a 29-yard run on Chelsea’s second drive of the third quarter, which set them up with a good scoring opportunity. A couple of plays later, Marquet found senior wide receiver Josh Gregg for a 15-yard touchdown pass, and then found Gregg again for a successful two-point conversion cutting the lead to 31-15.

This woke up the Hornets’ defense as they forced Bessemer City to a three and out on the next two drives, but Chelsea was unable to get any points out of it. Finally, after forcing their third consecutive three and out Reynolds, battling through his injury, had enough. He broke free for a 40-yard touchdown spinning out of a would be tacklers arms sprinting up the right sideline like nothing was wrong. Another successful two-point conversion had the Hornets within one possession at 31-23 with just under three minutes left.

They were unsuccessful on their onside kick attempt, but the crowd was awake and helped will the defense to yet another three and out. A fumbled snap on the Tigers’ punt attempt had Chelsea set up on the Bessemer City 41-yard line with 2:57 left to play.

Despite being down 31-7 with just over five minutes left in the third quarter, the Hornets had the ball down 31-23 with 1:50 left in the game and a chance to tie it up. Chelsea used five tough plays to get to the 21-yard line setting up a third and one. Marquet aired out a pass to the end zone that went through the hands of the receiver and defender.

Now facing a fourth and one with :55 seconds left, Chelsea was lined up in a power formation to try and gain the short one yard for a first down, but the right tackle jumped early causing a five-yard backup. On fourth and six Marquet was tackled for no gain while trying to escape the Tiger pressure, which sealed the game at 31-23.

Reynolds ran the ball 29 times for 227 yards after the early game injury, while Marquet finished with 86 yards and two touchdowns through the air and another 94 yards on the ground.

“There’s no quit in my guys,” Chelsea head coach Chris Elmore said. “They could’ve folded up easily in that game, but they had guts and fought so hard. That’s why I love them because they aren’t going to lay down and quit.”

It was an emotional scene as several players broke down and balled their eyes out after the loss, but it wouldn’t have been so hard had they not fought so hard. Chelsea will head into the offseason with an overall record of 8-3 for the 2016 season and plenty of motivation for next year.

Montevallo cruises past Southside-Selma in opening round

By BAKER ELLIS / For the Reporter MONTEVALLO – The Montevallo Bulldogs made short work of the visiting Southside-Selma Panthers... read more