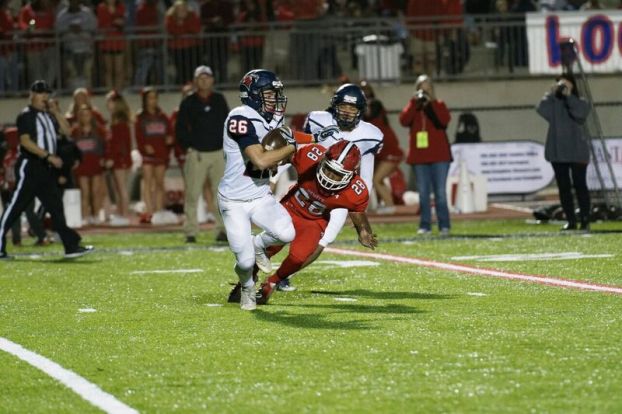 Oak Mountain falls at No. 2 Hewitt-Trussville

TRUSSVILLE – The Oak Mountain Eagles (3-7) took to the road on Friday Nov. 2 to try and upset the No. 2 ranked Hewitt-Trussville Huskies (10-0) in the first round of the 7A playoffs. The Huskies run game ended up being way too much for the Eagles to handle as they used seven different running backs to rack up 387 yards on the ground in a 63-21 win.

Even though Oak Mountain gave up an early touchdown to the Huskies, things were looking pretty good early on for the Eagles.

Trailing 7-0, they were able to hold Hewitt in check during the first quarter. With 3:01 left in the quarter senior running back Daniel Salchert ran in a touchdown from five yards out to tie the game up at seven. It was looking like they would go into the second quarter with a tie ball game, which Oak Mountain would have easily taken coming into the matchup.

Unfortunately for the Eagles, Hewitt scored another touchdown in less than a minute to take the 14-7 lead into the second quarter. The Huskies recovered the ensuing kickoff and scored again at the beginning of the second quarter, and went on to score the next three drives in a row giving them 35 unanswered points and a 42-7 lead with nine seconds left before the half.

Oak Mountain got the ball back before the half and while trying to make something good happen going into the locker room, Eagle’s senior quarterback Wyatt Legas threw a 56-yard pick six as time expired increasing the Hewitt-Trussville lead to 49-7.

Although it seemed as if this game was over, the Eagles still had a little fight left in them. Salchert broke off a 50-yard run on Oak Mountain’s first drive of the second half and then one play later he racked up another 16-yard run. A few plays later running back Jaylin Gaines ran in from five yards out to cut the lead to 49-14.

The Eagles got the ball back again with 8:40 left to play in the third and went on a 65-yard drive, which was capped off by a three yard Luke Percer rushing touchdown. All of a sudden Oak Mountain had a little bit of momentum after scoring 14 unanswered points of their own, but the Huskies made sure that was short lived as they went on to score the game’s final 14 points to win by the final of 63-21.

Legas completed 12 of 21 passes for 96 yards and an interception, while Salchert led the ground attack with 109 yards on 11 carries (9.9 average) and one touchdown.