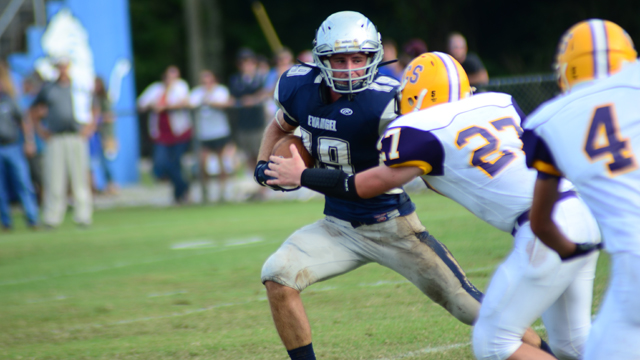 Brad Baggett, an Evangel senior, had his senior season end early due to a torn quadricep, but remains thankful for the chance he had to play for as long as he did. (File)

ALABASTER – On Oct. 4, the Evangel Christian Lightning won their second consecutive ACSC state title, beating Ezekiel Academy easily by a final score of 68-30. The win moved the Lightning to 11-1 on the 2016 season, and marked Evangel’s 22nd win in its’ last 23 games. The Lightning have, for most of the last two years, been essentially unstoppable at the eight-man, ACSC level, and have also proved their mettle against 11-man, AISA competition in 2016 as well. Through 12 games this season Evangel has averaged 43 points per game and has given up less than 17.

One of the primary reasons for that stretch of dominance has been the backfield play of seniors Micah Murphy and Brad Baggett, both of whom have been in the Evangel football program since they were in the seventh grade. For the last two seasons, Murphy has been the spotlight of the Lightning offense, and rightfully so, as the shifty quarterback is likely the best player ever to play in the ACSC division. While Murphy has dominated headlines, his classmate and running mate Baggett has been equally as important to Evangel’s success. 2016 was supposed to be, and in large respect turned out to be, their best prep season yet.

While the two cut and gashed through opposing defenses for most of the season, Baggett’s last ride was cut unceremoniously short due to injury. However, even in the face of that hardship, Baggett has remained upbeat and thankful for his time with the Lightning.

Baggett, a six-foot, 180-pound senior, grew up playing football alongside his older brother David. He began attending the Evangel Christian Classical School, the brick-and-mortar sibling of the homeschool-based Evangel Christian School, in the third grade, and stayed there through the 10th grade before the decision was made for him to finish his high school years as a homeschooled student. In those early days, Baggett played city league football, but soon gave that up to be able to watch and support his older brother play for Evangel. As an elementary schooler, Brad began to tag along with his older brother to team workouts and functions.

“It was pretty much just me doing that for a while,” Brad said, referring to the fact he was the only one his age attending team functions. “I was the youngest one out there for a few years.”

Eventually, Brad moved into the seventh grade and joined the team, the same year Murphy did as well. Coinciding their arrival was the arrival of a new junior varsity coach, Micah’s father Don. Coach Murphy moved with that class up to the varsity level in 2014, and has been Brad’s head coach for the last six years. With that time has come a deep understanding and appreciation for the type of kid and player Brad has become.

“Brad’s a team-builder,” Murphy said of his senior. “As he’s gotten older he’s gained respect; he helps organize offseason workouts. He’s always played his role, even as a sophomore. He’s been a cornerstone of this program.”

In his junior year, Baggett accumulated 1,109 total yards of offense along with 21 touchdowns, and the stage was set for a wonderful senior season. In the offseason between the 2015 and 2016 seasons, the AISA announced a change in policy that would allow its’ member teams to schedule ACSC competition in 11-man football, which gave Evangel its’ first opportunity to step up to the bigger game.

“It was an answered prayer,” Baggett said of the chance he got to play 11-man football this season. “We’ve been wanting to play (11-man) for so long. For the most part those eight-man games weren’t too big of contests. With 11-man you get to play more stuff, the dynamics chance, the speed changes. You get to run plays designed for that format.”

The Lightning raced out to a 6-0 record to start the year, and their seventh game of the season was against a Cornerstone team that finished the 2016 season with eight wins. In the second half of that game, Baggett began to wear down the Charger defense with a number of punishing runs when he came up limping.

“We started running a hurry-up offense,” Baggett recalled. “I ran it six or seven times in a row on one drive. Then the next drive I had a 66-yard run. On the next drive, no one even touched me when it happened. I was running and just felt something wrong in my leg and ran out of bounds. It scared the mess out of me. If you pull a hamstring or turn an ankle, you know what it is. This wasn’t that.”

Baggett tried playing in Evangel’s game against Marengo Academy two weeks later, but was obviously not at full speed. After an MRI, what the Baggett’s and Evangel hoped was a pulled quadricep turned out to be a torn quad, and with that diagnosis came the end of his prep career on the gridiron.

“It breaks my heart he hasn’t been able to finish his senior year,” Murphy said. “You don’t replace a guy like that.”

While the injury he suffered in the Cornerstone game forced an abrupt end to his final season of football, Baggett is not jaded, but instead remains upbeat and thankful for the opportunity he got to play and learn under the direction of his longtime coach.

“I would definitely say just building a relationship with Coach Murphy,” Baggett said. “A lot of guys don’t have a chance to go through so many years with one coach, or they only have a coach they know on the field. With Coach Murphy I couldn’t have asked for a better example of how to be a leader, and he’s also taught us more than anything that actions speak louder than words. He’s taught us how to be not just great football players, but good men.”

The only blemish on Evangel’s record this year came against that Marengo Academy team, which finished the regular season ranked as the No. 4 team across the AISA. Evangel lost that game 35-19, and that 16-point margin of victory was the smallest for the Longhorns in the 2016 regular season. With Baggett at full speed, who knows whether the Lightning could have pushed Marengo to the brink.

Baggett ended his senior year with 90 carries for 567 yards and 12 touchdowns, good for 6.3 yards per carry and a touchdown every 7.5 touches, as well as 10 receptions for 119 yards and three more scores. Now, upon graduation, Baggett will likely head to Auburn University, the school he has wanted to attend since he was young, where he will be a regular student and look fondly back on his memories as a member of the Lightning.