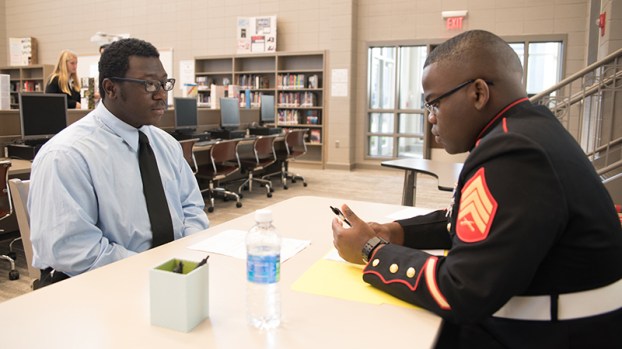 HELENA– Helena High School seniors had the opportunity to network and receive professional advice on Nov. 4 at the third annual Senior Interview Day. From 8:30 to 11:45 a.m., professionals from around the community volunteered to hold mock interviews for students at the HHS Media Center.

“It’s just a way to give seniors a chance to start the interview process,” said Shelby County Secondary Program Area Specialist Lauren Yancey. “Many of them have never had to sit in on an interview. When we’re about to release them into the world, we want them to have the opportunity to see what it’s like.”

“We’ve done Senior Interview Day every year that we’ve been open. It’s important for students have to have these skills,” said Blanton. “It’s a good thing for the students to step out here and do this on their own. They’ll learn to have confidence in themselves, the importance of presenting yourself in a positive way and that this is the beginning of many interviews for them in their journey of life.”

There were 22 volunteers who interviewed students, most of which work in Helena. HHS Ambassadors also helped by showing students to their designated areas and offering refreshments.

“I sent out an [invitation] to whoever was willing to give up some time and come help us. I really appreciate our helpers. They’re incredible,” Blanton said.

According to Marine Corps Recruiter Sgt. Corey Furr, Senior Interview Day also had the potential to be a networking tool for students.

“My goal is to get as involved with schools around the area. At the end of the day, my biggest goal is helping the kids,” said Furr. “The first question I asked them was ‘what do you want to do?’ The kids don’t know this but an interview can make or break. This is opening doors for a lot of students.”

According to Furr, while it it important to be professional during an interview, employers look for a candidate who can be sociable and conversational.

“A lot of kids go in with the idea that you have to be composed and professional at all times, but breaking the ice can relax you,” Furr said.

After interviewing several students, Yancey said that she expects students from HHS to do well in the future.

“It’s neat to see kids grow and figure out what to do with their lives,” said Yancey. “In Shelby County we are doing everything we know to do to prepare students. I’m excited about the things that we’re going to get from them.”