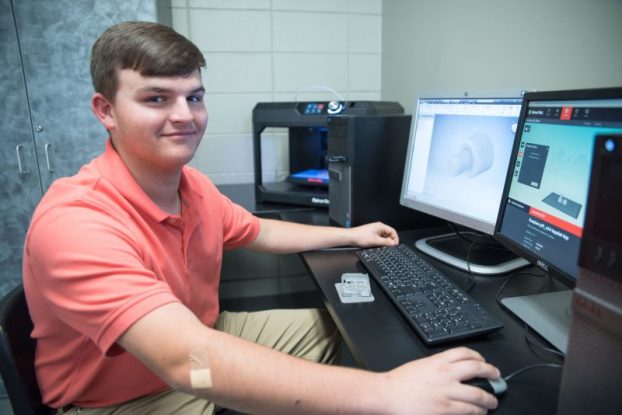 “I use a Chromebook in most of my classes,” he said. “We use them for pretty much everything.”

Teachers use Google Classroom to post assignments and links to readings and videos. Students can also have discussions about assignments via Google Classroom. For the past two years, Pelham City Schools has invested $1 million toward technology additions and upgrades throughout the school system.

For the 2016-2017 school year, Waddell said the system purchased 900 Chromebooks, which are used by fourth through 12th grade students.

Last school year, the system purchased 1,030 Chromebooks for student use and about 150 for teachers, which brings the total number of Chromebooks purchased system wide in the last two years to just over 2,000.

“The big push for the past couple of years has been getting Chromebooks to all of our fourth through 12th grade students,” Waddell said.

In addition to purchasing devices, technology coordinator Derrick Waddell said the system has also invested in software and network upgrades and professional development.

Kindergarten through third grade students use iPads in the classroom, Waddell said. The system purchased 80 iPads this school year, bringing the total to 140.

“The projectors turn the regular classroom white board into a smart device,” Waddell said.

MakerBot 3D printers have been installed at each school and more than 160 new desktop computers have been dispersed between all four schools in the last two years, especially to support the College and Career Academies at PHS and Riverchase Middle.

It cost the system about $12,000 to install updated video cameras and production equipment.

“The previous system was from the ‘90s,” Crain said. “It was very antiquated.”

Crain said more students are now involved with PHS Daily Broadcasts. The daily broadcasts are recorded and edited in advance and there’s now a bi-weekly video presentation and a weekly Spanish broadcast.

“We’ve really tried to invest in several different areas to help students gain experience using various kinds of software so that they have as many opportunities as possible after the graduate from high school,” Waddell said.