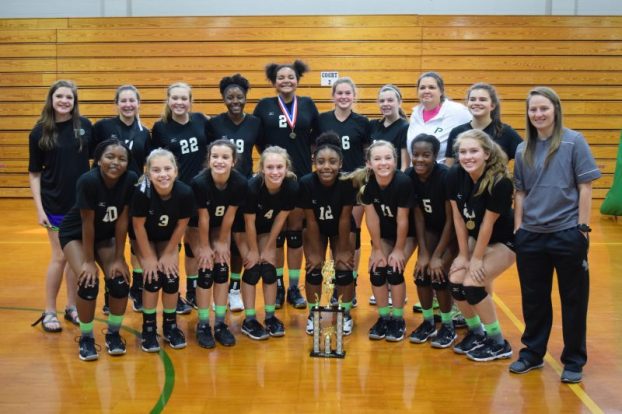 The seventh grade team clinched the win by defeating John Carroll. Riverchase took the first set of the match 25-22 to take an early 1-0 lead, but John Carroll didn’t give up and won the second set 25-22. However, Riverchase pulled ahead in the third set, winning 15-8.

“We are so proud of them,” Jones said. “They worked so hard to achieve this.”

The teams had an end-of-the-season party to celebrate their accomplishments. Jones said each student received a medal for their hard work during the season.

Jones said preparation for the season began in the summer with workouts with the PHS volleyball team.

“That helped us a lot,” Jones said. “Both teams worked out with the high school team three days a week for all of June. We want our programs to mesh. We’re working together to make sure the middle school girls are fundamentally sound for when they go to the high school.”

Two days a week, Jones said the girls participated in strength and conditioning workouts called PurMotion. The teams attended a bootcamp at UAB in July and started practice for the season during the first week of August. Jones said the seventh and eighth grade teams often times played against each other during practice.

Brad Baggett, an Evangel senior, had his senior season end early due to a torn quadricep, but remains thankful... read more