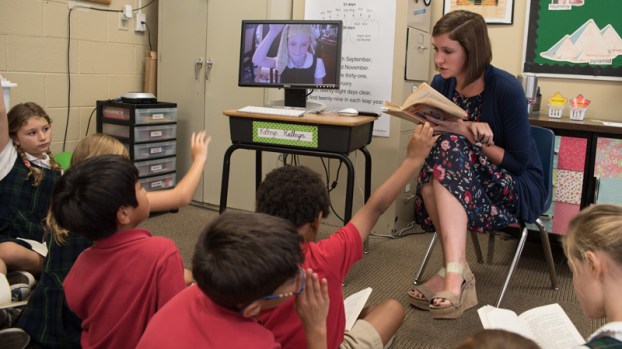 NORTH SHELBY – Kathryn Marbutt listens along with classmates as her teacher reads from Chapter 6 of The Yellow House Mystery, a book in the Boxcar Children series.

“It was a pleasant ride to Maine,” the chapter begins. “They ate lunch on the way.”

Sarah Armstrong stops reading to discuss the book with her second grade class, and Marbutt is one of several who raise their hands to answer questions.

Marbutt participates in her class at Westminster School at Oak Mountain virtually—an ongoing battle with cancer prevents her from attending physically because classmates may carry germs that could be especially dangerous to someone with a weakened immune system.

Marbutt was diagnosed with acute lymphoblastic leukemia on June 20.

Among the family’s worries was how she would keep up with her schoolwork.

“When she was diagnosed, I didn’t know what the school year would look like,” Jennifer Marbutt said. 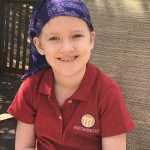 Kathryn Marbutt was diagnosed with acute lymphoblastic leukemia on June 20. Her treatments weaken her immune system, preventing her from physically attending school. (CONTRIBUTED)

Prior to the first day of school, Kathryn’s father Jonathan, who is a software engineer, researched video conferencing set-ups and discussed them with school officials.

On the first day of school Aug. 9, there was Kathryn, ready to learn.

“It’s been amazing how well it has worked,” Kathryn’s mother, Jennifer Marbutt said and lauded Westminster administrators and faculty for their willingness to accommodate her daughter. “She does everything they do. They make every effort to include her in everything. She’s been able to keep up with her friends and meet new people in her class. She hasn’t missed a beat.

“I was worried about her feeling isolated, but she has really felt like she is a part of the class.”

During school, Marbutt sits in front of a computer in her family’s dining room at their home in the Highland Lakes subdivision. She is able to see and hear Armstrong and classmates, who interact with her throughout the day and include her in activities, such as when the students split off into pairs for snack time chit-chat.

In the classroom, a monitor that provides video and audio feed of Marbutt is placed on top her desk, complete with her name tag across the front.

Kathryn Marbutt said reading is her favorite part of the school day, when her classmates huddle around her computer in the back of the classroom.

On the second day of school, all second graders came into Armstrong’s classroom to see Kathryn.

“We let Kathryn lead a little bit of conversation time,” Armstrong said about discussions that included her treatment and why she could not be at school. “I clarified for the kids that this isn’t something you can catch. Normally, when you stay home from school, it’s because you have something someone else can catch. With Kathryn, it’s the opposite.”

Armstrong said her students adjusted to the arrangement the first couple of weeks.

“Now, she is literally just one of the kids in the class,” Armstrong said. “There is nothing out of the ordinary about it to [the students]. There’s a little ding when she logs on to her computer, and the kids will turn around and say hi. Then, they turn around and get back to work. It’s like they’re greeting their friend who just walked in the door.” 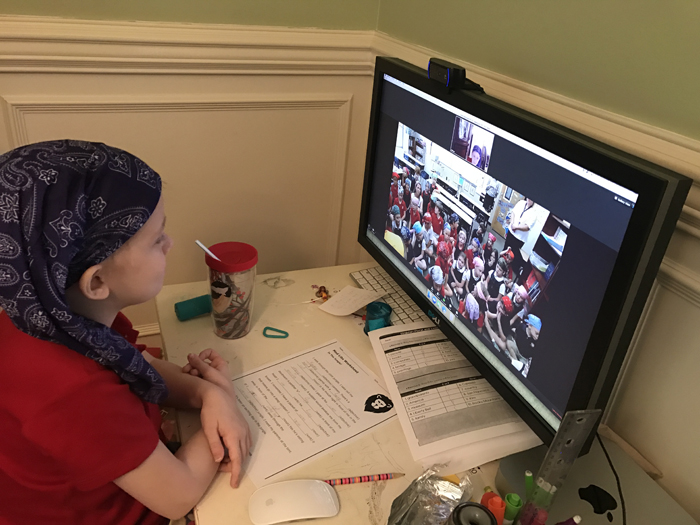 Marbutt looks on from her home as fellow students wear bandanas in her honor. (CONTRIBUTED)

Kathryn’s schedule for physically returning to school is uncertain. The next chemotherapy treatment depends on the time it takes her to recover from the previous one.

Typical treatment for ALL lasts 2.5 years, though only the first six months are considered necessary to avoid public places like schools.

“Her immune system is pretty much non-existent,” Jennifer Marbutt said. “She has such a high risk of infection that if she gets a fever, she has to be admitted for a few days.”

Kathryn is an only child, so her physical contact is limited to her parents.

“She’s away from her friends so she has no one to play with, but we have a lot of family time,” Jennifer Marbutt said. “It’s a tough time, but it’s also a time to see there can be a lot of positives to come out of a situation like this. School is one of those positives because everyone has been so supportive.”