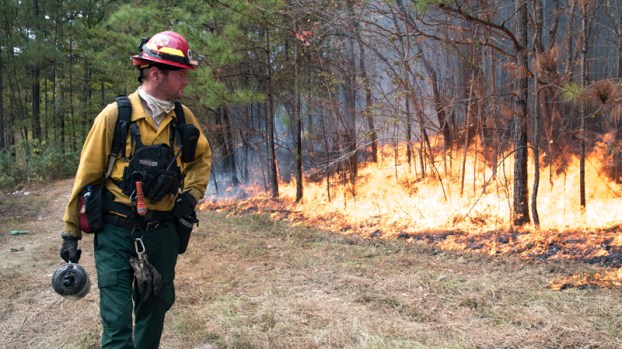 Firefighters from three local agencies and the Alabama Forestry Commission have responded to a brush fire in the area of U.S. 280 and Bear Creek Road that has burned for four days. (REPORTER PHOTO/KEITH MCCOY)

CHELSEA – Firefighters continue to battle a brush fire off U.S. 280 in Chelsea believed to have started on Nov. 5.

“It’s been an ongoing challenge for us,” Shirley said on the afternoon of Nov. 8. “There’s a tendency for it to flare back up because of how dry it is, and all it takes is one little spark to get going again.”

About 8 acres of wooded land has burned near U.S. 280 and Bear Creek Road, Shirley said and added that firefighters’ priorities are keeping the blaze away from structures and preventing traffic hazards from the smoke generated.

No property has been damaged or injuries sustained, but the fire did reach within 20 feet of a residence in the Forest Parks subdivision, Shirley said, before firefighters intervened.

The effect on traffic has been minimal, Shirley said. One northbound lane of U.S. 280 has been closed at times for the safety of crews working on the shoulder.

Shirley said he thinks firefighters are making progress in extinguishing the fire. Residents and travelers may continue to see “hot spots” smoldering within the burned area, but firefighters’ primary concern is not allowing the fire to spread.

As many as 15 people have been working at the site at any given time, mostly from Chelsea Fire.

Shirley said firefighters have worked longer shifts in an effort to control the fire—and the time and manpower devoted to battling the blaze can cause other problems.

“When we’re busy taking care of a fire such as this, it ties up resources that could delay response to medical emergencies and other calls.”

He said devoting such resources to the fire could slow the department’s response time for medical emergencies and other calls.

Though an official cause of the fire has not been determined, Shirley encouraged residents to adhere to restrictions put forth in no-burn orders and to ensure that cigarette butts are not allowed to reach wooded areas.

“This has cost us quite a number of man hours,” Shirley said. “Crews have worked day and night trying to protect residences in the area. We’re just going to keep sending crews out there to address any problems we come across.”

Updates on the situation are being posted on the Chelsea Fire Facebook page (@chelseafireandrescue).

Shirley thanked the Chelsea community for its support.

Many absentee applications not received in time

COLUMBIANA –Missed deadlines by voters, established deadlines that are unreasonable in some cases and apparent delays in mail delivery are... read more