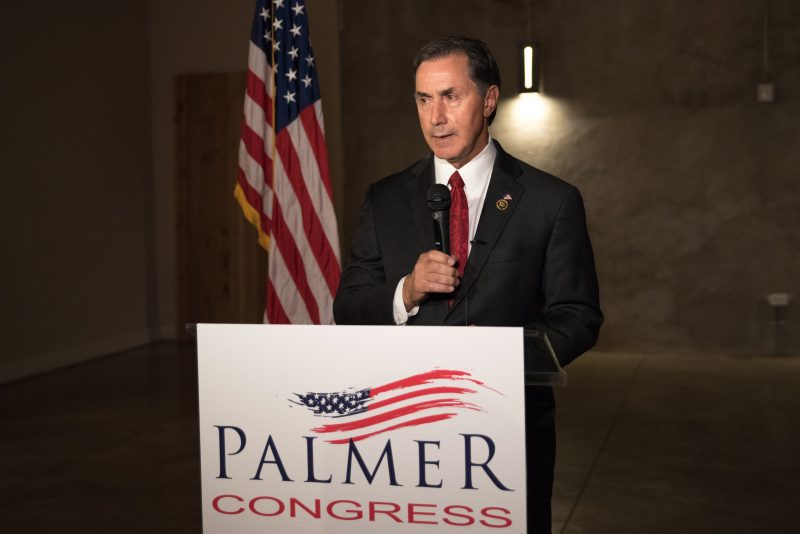 Rep. Gary Palmer expresses thanks to his supports during his campaign party Tuesday, Nov. 7, in Hoover. (Reporter photo/Keith McCoy)

Republican incumbent Gary Palmer was re-elected to a second term in the U.S. House of Representatives for Alabama’s Sixth Congressional District during Tuesday’s General Election.

“To those who have supported me, I want to give a heartfelt thank you to you all,” Palmer said after his win. “I’m very appreciative of their support and I look forward to serving the people of District 6.”

The congressman said his first order of business upon returning to office will be to work toward repealing the Affordable Care Act.

“We need to replace it with something people can afford,” he said. “People are in a panic over premium increases – it’s collapsing under its own weight. Something needs to be done.”

Members of Congress serve two-year terms. Palmer said he intends to run for a total of five terms, which would equal 10 years. In that time, he said he feels like he will have had an opportunity to effect significant change.

In 2014, Palmer was elected to the 114th Congress, having never served in office before. In Congress, Palmer focused on paying down the national debt by cutting spending; regulatory reform by reducing the number and expense of federal regulations; lowering energy costs and spurring economic growth and job creation by accessing America’s vast energy resources; replacing the Affordable Care Act with a health care plan that puts people back in charge of their health care decisions; and protecting life in all its forms.

Palmer serves on the Oversight and Government Reform Committee, serves on the Budget Committee, the Space, Science and Technology Committee and is the representative for Alabama, Georgia and South Carolina on the Republican Policy Committee.

Gary Palmer grew up in Hackleburg, a small town in Northwest Alabama, and now lives in Hoover. He attended the University of Alabama where he earned a Bachelor of Science in Operations Management. He was the first person on either side of his family to attend college.

Many absentee applications not received in time