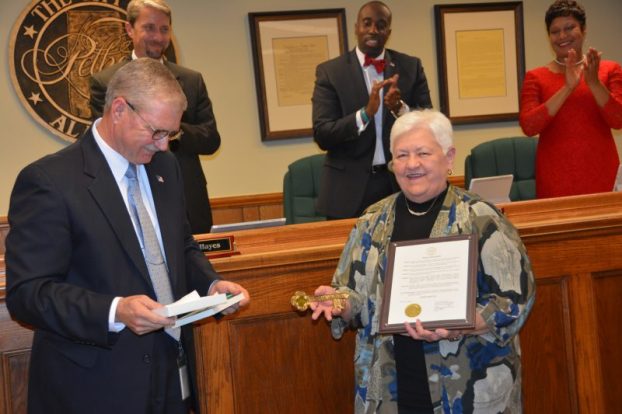 PELHAM – Monday’s Pelham City Council meeting was a night of new beginnings for some and the closing of a chapter for another.

At the meeting, Mayor Gary Waters proclaimed Monday, Nov. 7, to be Karyl Rice Day in the city of Pelham in honor of the councilwoman who served for 32 years. Waters also presented Rice with a key to the city.

As Rice, who has been a Pelham resident for more than 40 years, was given a plaque and a key to the city, she was received with a standing ovation from the audience.

“I’m proud of how far we’ve come,” Rice said while holding back tears. “It almost feels like Pelham is my baby, and now my baby has grown up and it’s time to let them go. I know that the city is in good hands and that things will continue as they should. We are a great city and we have great things in store.”

City council member Rick Hayes said Rice has been a “guiding light” for the council over the last four years.

“We will always owe you a debt of gratitude,” Hayes said.

She served as the council representative to the Planning and Zoning Commission and the Pelham Civic Complex and Ice Arena, and served on the Technical Assistance Team for evaluating progress at Riverchase Middle School in achieving the goals of the “Making Middle Grades Work” program established by the Southern Regional Education Board.

Mildred Lanier succeeds Rice, who served in Place 5. Lanier, who is embarking on her first term on the council, was sworn in to the position at the meeting also.