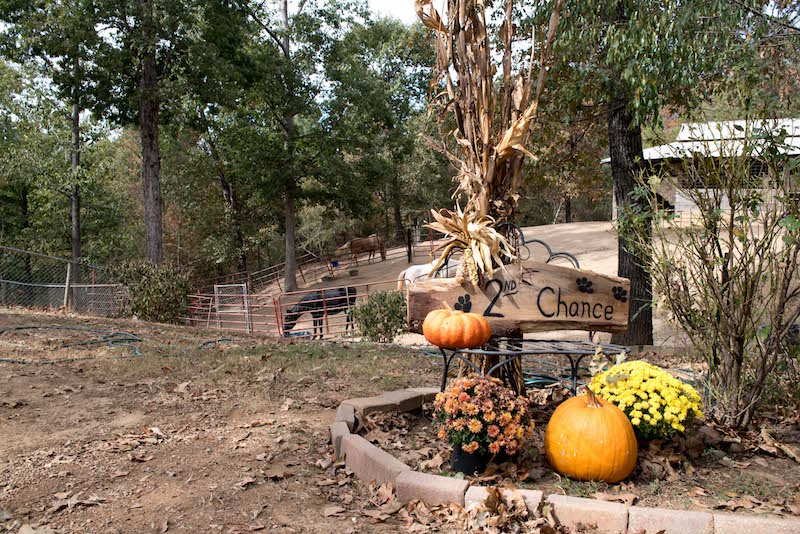 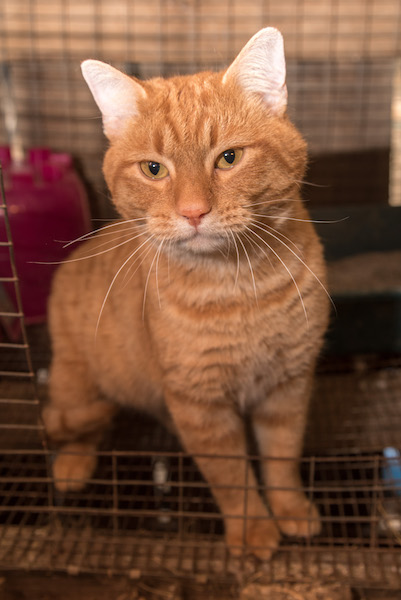 Dexter is a young cat in need of a permanent home. 2nd Chance owner Sandra Shaffer nursed him back to health after he showed up at her barn this summer. (Reporter Photo/Keith McCoy)

Shaffer isn’t exaggerating. 2nd Chance is a lifetime commitment she has made to the dogs, cats, horses and other animals living on her 16-acre property, to provide a refuge for them until they are adopted or until they have reached the end of their natural lives.

Shaffer founded 2nd Chance in 2006 as a non-profit organization and one of only several no-kill animal sanctuaries in the state, meaning no animals are euthanized because of space issues.

Shaffer operates 2nd Chance primarily by herself on a daily basis. A lack of consistent funding and volunteers limits her outside help.

Even so, Shaffer must find ways to maintain the sanctuary grounds and the high level of care she provides to the animals.

Over the last few years, she has received a stream of generous donations that have enabled her to expand the cat facility, improve the dog facilities and run water lines necessary in maintaining those areas.

This summer, Shaffer received an influx of donations – between $6,000 and $7,000 total – from people in Alabama, Georgia, Tennessee and beyond who read previous stories about the sanctuary and wanted to help. 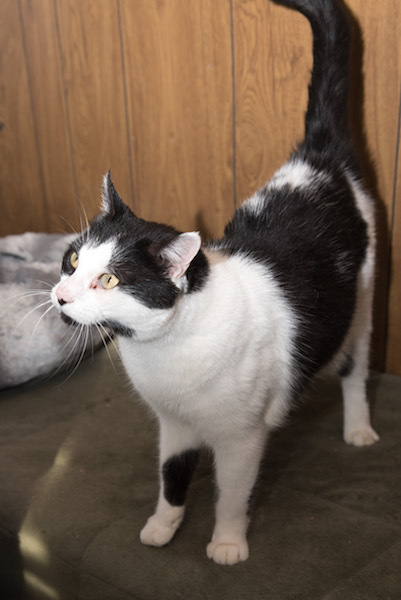 Domino is another cat at 2nd Chance that needs a forever home. (Reporter Photo/Keith McCoy)

Shaffer said she was grateful for the donations, which allowed her to make improvements she had been delaying.

“Thank you to all the people that did make donations,” Shaffer said. “I appreciate it.”

Inside the cat facility, known as the “cattery,” Shaffer was able to replace worn floor strips with a new 21-foot-long sheet of vinyl, making it much easier for her to clean. She also hung shade material around the sides of the screened portion of the cattery to shield the cats from the sun.

As helpful as the private donations have been, Shaffer is still hoping to secure one or more corporate sponsorships and establish at least two annual fundraisers with help from volunteers to create consistency in donations.

“Here’s another year rolling around and I haven’t done any fundraisers,” Shaffer said. “If I don’t do something about fundraising, I’m not going to be able to go on.”

Without a consistent flow of donations, Shaffer must sometimes scrimp and save just to cover the cost of food for the animals. With so many animals, she has to buy food in bulk.

“I’m down to half a pallet of dog food,” she said. “If I don’t have money coming in, I can’t buy food. That scares me. I went two years without dog food coming in, and I nearly went bankrupt, when I had 85 dogs.”

Donating a load of gravel, for example, would help Shaffer fill in her driveway at 2nd Chance. Or lending her a Bobcat or another piece of equipment for a day, free of charge, would allow her to save the money she would have to spend renting the equipment for other expenses, such as vet bills, litter, food and hay.

Recent drought conditions have affected her horses’ hay supply, which has to last through the winter.

“There’s things people are already doing in their everyday life that would help,” Shaffer said. “When I have to pay for everything out-of-pocket, money goes real fast. I’m not trying to be poor, pitiful me; I’m just trying to let people know how to help.”

More funding would allow Shaffer to hire more help when she needs extra manpower for maintenance projects or physically demanding tasks at the sanctuary.

“I have to pace myself, and I didn’t use to have to do that,” she said. “It needs money, it needs energy and I’m running out of both.”

Meanwhile, Shaffer is not turning new animals away. A young, malnourished orange cat she named Dexter showed up at her barn in July, and she nursed him back to health.

Shaffer doesn’t take animals surrendered by their owners, and she doesn’t choose animals for the sanctuary based on whether they are good candidates for adoption. Some of her animals are classified as “seniors.”

“All my animals, I promise they’re not going to be put back in harm’s way,” she said, “For however long it takes. From now until that dog has a better place to live, (I’m) it. I feel like I’m maintaining them, but I wish I could do more.”

For more information about the sanctuary, email Sandra Shaffer at sshaffer01@bellsouth.net, or visit Shelbycountyreporter.com and type “2nd Chance Animal Sanctuary” into the search bar to view more stories.