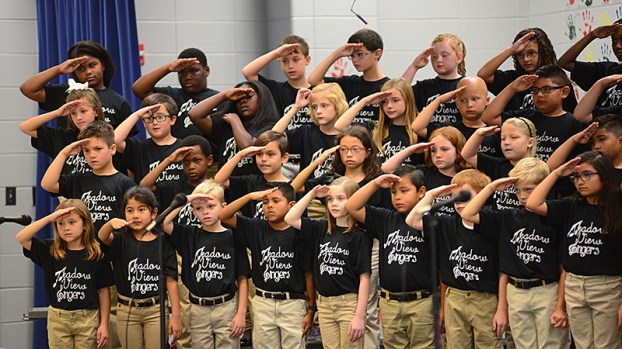 ALABASTER – Students at Alabaster’s Meadow View Elementary School saluted the nation’s veterans – Many of who were in attendance – during a Veterans Day ceremony on Nov. 9 in the school’s auditorium.

During the ceremony, which came a few days before the Nov. 11 holiday, several groups from Meadow View, Thompson High School and the University of Montevallo presented patriotic music and pageantry to praise those who have served or are serving America in the military.

“We hope that throughout our presentation, we will convey to you our appreciation for your service to our country,” MVES music teacher Dennis Jones told the hundreds of parents in attendance at the ceremony. “We are so honored that you are here with us today.”

The school also held a separate ceremony on the same day for its students.

During the ceremony, the University of Montevallo’s clarinet choir, which is directed by Lori Ardovino, played the song for each branch of the armed forces while members of each branch stood to be recognized.

The Thompson High School Junior ROTC posted the colors for the Pledge of Allegiance, which was led by the Jones-directed Meadow View Singers choir.

The Meadow View Singers performed “The Star-Spangled Banner,” “Proud of our Veterans,” “America,” “Where is the Peace?” “God Bless America” and “One Nation.”

Sam Ardovino played “Taps” while the crowd held a moment of silence for those who have died while serving the nation.

Between each musical number, several members of the Meadow View Singers took to the microphone to read passages about the history of America and its military.

By BRIANA HARRIS / Staff Writer PELHAM – The Pelham City Council is without a newly elected council president after... read more