HOOVER – A Calera man has been arrested and charged with discharging a firearm into an occupied building after allegedly shooting a 10-year-old boy through an apartment wall.

According to a news release from Hoover Police, Quintin Ladarius Entin, 24, of Calera, was handling a loaded firearm when he unintentionally fired the weapon. The bullet went through the wall of an adjacent apartment, hitting the 10-year-old child in the groin. 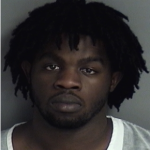 Hoover Police responded to the incident, which took place at the 3200 building of Warringwood Heights Apartments on Warringwood Drive on Tuesday, Nov. 8, at about 10:32 p.m.

The child, who was sitting in the living room of his apartment at the time of the incident, was treated at the scene by paramedics and transported to Children’s Hospital. He was conscious and alert when he was transported.

The victim is resting comfortably in Children’s Hospital, according to authorities.

Entin fled the scene prior to the arrival of law enforcement, but later turned himself in to Hoover Police. On Wednesday, Nov. 9, Entin was transferred to Jefferson County Jail on bonds totaling $15,000.