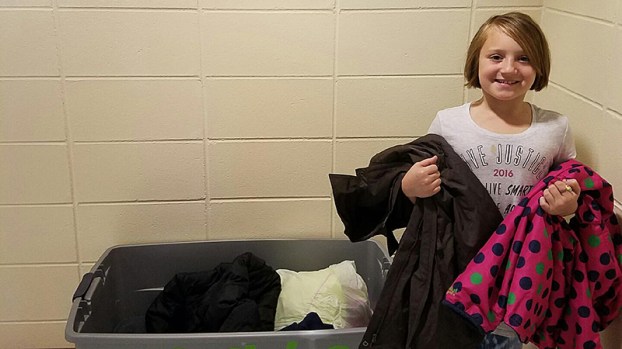 Creek View Elementary student Ariana Lafrance came up with the idea to host a coat drive to help children in need. Lafrance is pictured with some of the coats donated to the school. (Contributed)

Creek View Elementary student Ariana Lafrance wanted to make sure children in need had a warm coat to wear this winter.

Lafrance, a second grader, first proposed the idea to have a clothing drive to her teacher, Brittney Roberson at the beginning of the school year.

“We had started an ‘Idea Notebook’ where I had the students write down different ideas they had” Roberson said. “Ariana wrote in her notebook that she wanted to collect clothes for people in need, and that is where the idea started to hold a coat drive originated.”

Lafrance wrote a letter to parents at Creek View explaining her idea to collect coats for children in need, and encouraged other students, parents and teachers to participate.

“We distributed Ariana’s letter to the parents explaining that if they wanted to participate we would be collecting coats at the school,” Roberson said. “We decided on coats because we thought it would be good with the cold weather coming up. Ariana even made sure to remind the parents in the letter to check all of the pockets of the coats being donated to make sure they were empty before donating.”

The coat drive started Oct. 31 and will end Nov. 10, with all of the coats collected being donated to Kids First Awareness Community Center in Alabaster.

Roberson said the school partnered with Kids First at the beginning of the school year for school supplies and backpacks, and Lafrance agreed it would be a good place to donate the coats collected through the drive.

“We have had a really great response to the coat drive,” Roberson said. “We have collected about 30 coats, and we look forward to seeing how many more we might receive. I met with Ariana and her mom to talk about the possibility of her delivering the coats, and she is really excited about that.”

Roberson said having a personal letter from Lafrance distributed to parents of children at the school likely influenced a larger response to those wishing to donate.

“I think seeing the letter from Ariana definitely helped influence people to give,” Roberson said. “Ariana has a heart to give. She had attended a birthday party where the guests were asked to bring donations for those in need instead of collecting gifts and that really made an impression on Ariana. She just really has a heart to help others, and it has been exciting for her to see her idea come to life.”

Roberson said anyone from the community can donate coats to the drive.

For more information about participating in the drive, contact Creek View Elementary at (205) 685-6100.