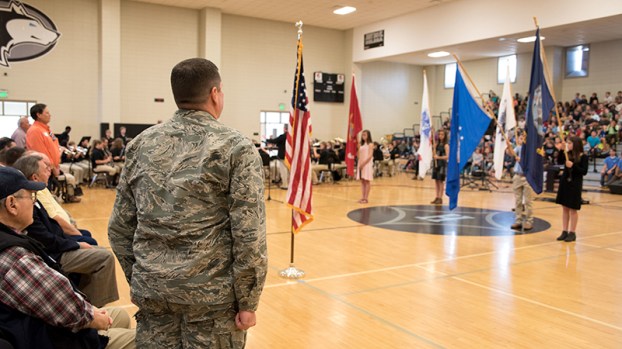 HELENA–The Helena Middle School gymnasium was packed on Wednesday, Nov. 9 as HMS honored veterans from all branches of the military at the school’s annual Veterans Day program.

The program, which is entirely student-led and celebrated annually near the Veterans Day holiday, consisted of numerous performances by the HMS band and HMS choir, the reading of several essays, poems and speeches by students and concluded with a slideshow presentation of several pictures honoring Veterans that have served or are currently serving our Country.

Local Veterans were given a front row seat for the program as Veterans of all ages were escorted into the gymnasium to be honored during the hour-long program.

Helena resident and U.S. Army Maj. Michael Tsimpides has served in the military for nearly 27 years and attended the program for the third consecutive year.

“I think it’s great that the school takes time to put this together and show patriotism,” Tsimpides said while spending time with his daughter at the reception following the program. “I really like the photos in the slideshow and it’s good to see and remember those who have served.”

Another way HMS students honored Veterans was by reading essay’s with facts about each branch of the military. While each essay was read, students brought in the flags for the Marines, Army, Coast Guard, Air Force and Navy while the HMS band played the “March of the Armed Forces.”

Some of the essay’s read by students were written describing who makes a hero and patriotic poems were also read.

The HMS choir performed a variety of songs that included “The Star Spangled Banner,” “Battle Cry of Freedom,” “In Flanders Fields,” and “My America.”

At the conclusion of the program, Veterans were given a certificate and honored at a reception in the HMS cafeteria.