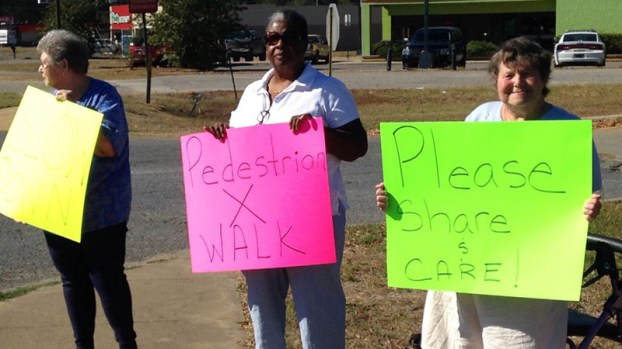 Shelby Woods residents hold signs by a crosswalk to remind drivers to slow down and be aware of pedestrians. (Reporter Photo/Amalia Kortright)

COLUMBIANA- Residents of Shelby Woods Apartments demonstrated beside the crosswalk on W. College St. on the afternoon of Nov. 10 to spread awareness about crosswalk safety in Columbiana and to remind citizens to slow down for pedestrians. Shelby Woods is an assisted living complex for elderly or disabled residents.

“A lot of Shelby Woods residents rely on crosswalks as a means of transportation.” said Shelby County Disability Rights and Services Peer Advocate Gwen Brown. “They are really stepping up to have more conversations among themselves and with city officials. There’s more of a partnership now that hasn’t taken place before.”

Brown said that many residents walk across W. College St. to buy groceries, and several residents have found themselves in dangerous situations while trying to cross the road there.

“This all started three years ago. I presented a petition to the city council and I expressed my concern as a citizen that someone would be seriously injured or killed. The city council, at that time, didn’t do anything about it,” said Shelby Woods resident Marvin Goad. “One day, I was at the crosswalk and I counted cars and trucks that went by before someone stopped. The total was 95 vehicles.”

Goad said that he has seen citizens, city officials and police officers neglect to slow down at the crosswalk. In Goad’s opinion, city officials need to set a better example for crosswalk safety.

“One of the residents at Shelby Woods told me about a situation where a car stopped and motioned for them to cross, and the car behind the car that stopped went around and almost ran over him and almost killed him,” said Goad. “[The police] are not writing any citations. If they’re not enforcing anything, then why should people obey the law? It’s a very dangerous situation and it’s been going on for a very long time.”

According to Brown, there are a total of 24 crosswalks in the City of Columbiana. She said that raising awareness for this issue has now become a citywide initiative.

“We met with the city council, and they were actually a step ahead of us. One of the city officials almost got hit, and that’s when the city decided to work on it. People are slowing down and the communication is increasing,” Brown said.

Shelby Woods resident Gwen Vernon said that while she does drive, she was previously unaware that there was a crosswalk on W. College St. until it was designated with a sign.

“As a driver, I didn’t realize that this was a crosswalk. There was nothing there that was catching my eye. Now that I know, I know that I need to slow down because some of my neighbors might be crossing,” Brown said.

Brown also said that many people in the city are unaware of the correct locations and procedures of crosswalks in Columbiana.

“What we’ve found is that many people don’t remember where these pedestrian crosswalks are and that they’re supposed to slow down and they’re supposed to stop when they see someone preparing to cross,” said Brown. “Hopefully, from this, we can continue the conversation.”

Brown and many residents at Shelby Woods are looking forward to working with the City of Columbiana to make crosswalks safer for citizens, and hope that other communities will soon follow suit.

“If we start here in Columbiana, then it’s going to reach nearby cities. That’s my goal, personally,” said Brown.