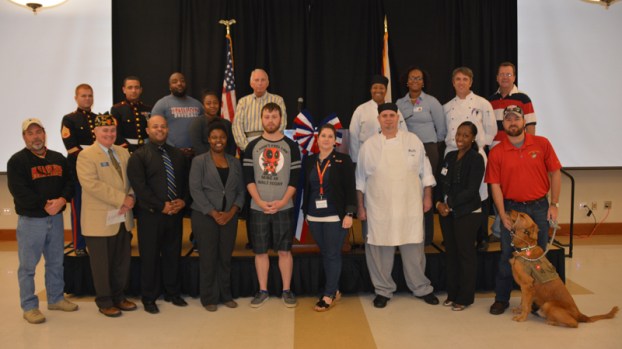 HOOVER – A Veterans Day Appreciation Program at Jefferson State Community College on Nov. 9 focused on the needs of those who have served.

The National Anthem was led by JSCC student Dallas Nolan, and then the college’s Veterans Affairs coordinator, Cedric Rodgers, welcomed those in attendance, which numbered about 50 and included several veterans and representatives of organizations that benefit veterans.

“There is truly a need for us to be familiar with the needs of our veterans,” Rodgers said. “One day is not enough for you, so we’re here every day for you.”

Eight percent of U.S. residents suffer from post-traumatic stress disorder at some point in their lives, Carmona said, compared to 23 percent of veterans.

“The biggest problem with PTSD is not many people are familiar with what the illness is,” Carmona said and added that those who suffer from PTSD can become stigmatized. “A suicidal person may not ask for help, but that doesn’t mean they don’t want help.”

Melissa Evans, coordinator of the Veterans Affairs suicide prevention department, was the next to address attendees.

Evans said the number of veterans who commit suicide decreases if they receive assistance from VA.

Evans said if anyone suspects a person is suicidal, they should ask if this is the case.

“Asking the question gives them permission to say yes,” Evans said. “Once they say yes, that’s when the hard work begins of getting them the help they need.”

“We are not experts, but we will find them the resources,” Bradstreet said.

“If you see something, make sure you say something,” Mays said.

Several representatives of veterans organizations addressed the crowd and had tables set up at the college to hand out informational material.

By Emily Reed For the Reporter NORTH SHELBY – Wolfe Anderson is in the process of joining a long line... read more