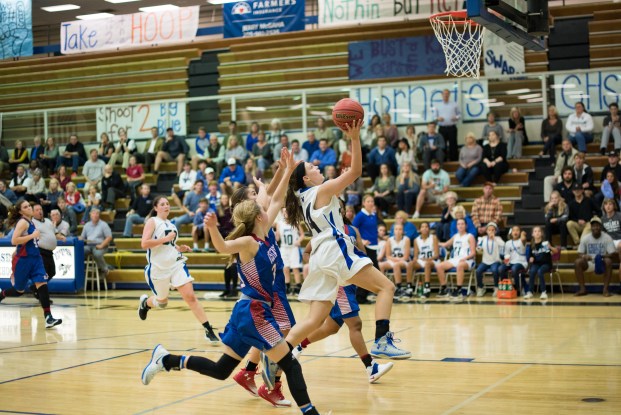 Chelsea sophomore goes up for two of her 34 points on the night. Her performance along with Suzanne Ridgeway’s 12 points, 7 rebounds and 5 assists and Hope Richard’s double double led the Hornets to an opening 63-58 overtime victory. (Reporter photo/Keith McCoy)

CHELSEA – The Chelsea Lady Hornets started their 2016-17 basketball season with a thrilling 63-58 come from behind overtime win thanks in large part to 32 points from sophomore Michaella Edwards.

Chelsea started hot and jumped out to a 17-9 first quarter lead, but Vestavia trimmed that margin down in a sloppy second quarter thanks to a 7-0 run. At one point in the quarter the two teams combined for eight consecutive turnovers. When it was all said and done the score was knotted up at 22 heading to the half.

Edwards got hot again in the third quarter accounting for eight of the Hornets’ 15 points. Both teams hit an offensive groove and went back and forth as Chelsea took a 35-37 lead into the fourth.

The start of the fourth quarter saw the Rebels go on a 9-0 run as they took a 44-37 lead before junior Hope Richard got an and one that sparked the Chelsea crowd and players. The lead was cut to 40-44 with 3:07 left to play.

Vestavia turned the ball over on three of their next four possessions, and the Lady Hornets took advantage converting those turnovers into points to tie the game up at 46-46 with 29.5 seconds left to play.

On the ensuing Rebel’s inbound, the Chelsea defense came up big forcing a crucial five second violation, which gave the ball back to the Hornets with 25 seconds to go.

Chelsea got several good looks and a couple of offensive rebounds before freshman Suzanne Ridgeway got one last look that banked in off the glass plus the foul. After the made free throw, the Hornets had a 49-46 lead and were on their way to victory.

The Rebels, however, weren’t ready to give up just yet. After a few passes around the arc, they found number 33 for a three pointer that found the bottom of the net with five seconds left to tie the game at 49 and send it to overtime.

Chelsea scored quickly on their first possession of the overtime, and then took advantage of two turnovers by Vestavia to go on a quick 9-0 run.

That run ended up being too much for the Rebels to overcome as Chelsea went on to win by a final of 63-58 and start their season on a high note. It’s clear that this year’s Lady Hornets are a much different team than last year’s and have plenty of talent.

Edwards ended with a game high 34 points and 8 rebounds. Ridgeway also had an impressive first game for the Hornets as she added 12 points, 7 rebounds and 5 assists. Center Hope Richard added a double double with 10 more points and a game high 15 rebounds.

The Lady Hornets will play at Gardendale on Tuesday, Nov. 15, with tipoff at 6 p.m.