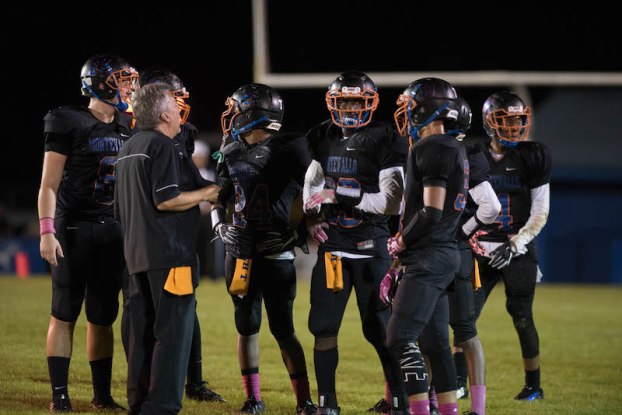 Montevallo fell in the second round of the playoffs to Class 3A No. 2 Mobile Christian on Friday, Nov. 11, to end the Bulldogs’ season at 10-2. (Reporter photo/Keith McCoy)

Mobile Christian defense too much for Montevallo in 2nd round

MOBILE – The Montevallo Bulldogs traveled three and a half hours south on Friday, Nov. 11, to take on Mobile Christian in the second round of the playoffs. Montevallo was coming off a dominating 45-18 win over Southside Selma, while Mobile Christian struggled in a 21-7 first round win over Straughn.

None of that mattered in this game as Mobile Christian used what they’ve used all season, defense, to win by a score of 36-14. Coming into the game, the Leopards had only given up 9.8 points per game on the season and hadn’t allowed more than 21 points on the season. That included seven games under 14 points and two shutouts. This game marked the seventh time on the year a team failed to score 10 points or more on them.

The Bulldogs’ came into the game with one of the better offenses in the state averaging 34.2 points per game, and they hoped that trend would continue against the tough defense.

Montevallo jumped out to a quick 6-0 lead and maintained that for a good chunk of the first quarter before Leopards’ quarterback Cameron Horne found Eric Poellnitz for a 60-yard touchdown pass, which gave Mobile Christian the 7-6 lead with 4:20 left. This is really all the stingy Leopards’ defense needed in order to hang on in this one.

Early in the second quarter, however, they gave themselves some breathing room after running back Jordan Graddy ran in a touchdown from 20 yards out to give the Leopards a 14-6 lead with 7:52 left before the half.

Mobile Christian’s defense stepped up again on Montevallo’s next drive forcing them to a three and out, and this is when things spiraled out of control.

After a good drive Graddy ran in another Leopard touchdown, this time from three yards out. Mobile Christian recovered the ensuing kickoff and scored very quickly on a 24-yard touchdown pass to Poellnitz. All of a sudden in less than three minutes of play the Bulldog’s gave up 13 points and found themselves down 27-6 with four minutes before the half.

Coming out of the half the Leopards tacked on a 31-yard field goal to extend their lead to 30-6 with 4:51left in the third quarter before Montevallo finally scored again to cut the lead to 30-14. Unfortunately for the Bulldogs it was too little too late.

Mobile Christian added one more long touchdown on a 53-yard run from Cam Alexander to put the final touches on the 36-14 win.

Even though it wasn’t quite the season-ending game Montevallo had hoped for, they still got 10 wins for the first time since 1983 after finishing the season with an overall record of 10-2.

By ALEC ETHEREDGE | Sports Reporter OZARK – After a thrilling 35-34 victory over Sylacauga in round one of the... read more