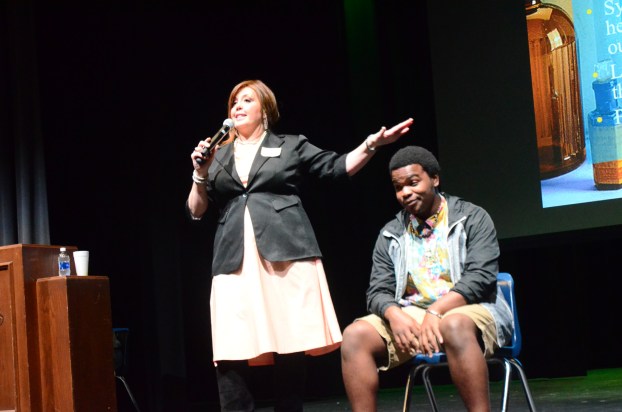 Using student volunteers to act out scenarios, Alvis spent the morning talking to students about what would likely be the outcome of each situation she presented to them.

From drug trafficking to underage drinking and sexting, students learned what the law says about each one.

Alvis presented a situation to students: If two high school students were in a car and one of the students was in possession of alcohol and a pill bottle with 19 hydrocodone pills, would one or both of the students be guilty of a crime?

Alvis said both students would be charged with minor in possession of alcohol and drug trafficking.

“At your age you don’t go to juvenile court for drug trafficking because it’s a Class A felony,” Alvis said. “You get charged as an adult and you go to an adult prison. So few pills can put you in the classification of drug trafficking.”

Alvis explained to students that if they are at a party with illegal drugs and alcohol, they’re still guilty of a crime even if they’re not drinking alcohol or doing drugs.

Besides drug offenses, sexting the No. 1 crime that teens and young adults commit, Alvis said.

“That’s distribution of child pornography,” she said. “That is a crime that society as a whole is not willing to accept and you are going to go to jail.”

She also informed students that if a person is not at least 16 years old, they can’t consent to any type of sexual contact.

“It’s statutory rape even if it is consensual. The age is the only thing that matters and there is no defense for it,” she said. “Hear me when I say this, if someone here is a senior and they’re dating a sophomore – break up now.”

To support his expensive habit he began selling drugs, stealing checks from his mother’s checkbook and stealing money from work.

“Like most people, I didn’t start out using crystal meth, but that’s what it grew to,” Bryan said.

Bryan said he started out drinking, smoking marijuana and doing drugs recreationally, but then it grew into addiction. At the height of his addiction, Bryan was homeless, unemployed and could only have supervised visits with his daughter.

Bryan was able to get his life back on track after completing rehab. He has been sober for almost eight years, and the now 41-year-old is married to his daughter’s mother and the two have since had two more children.

Bryan used his experience as a warning to students that although drinking and drugs recreationally may seem harmless now, it can quickly turn life upside down.