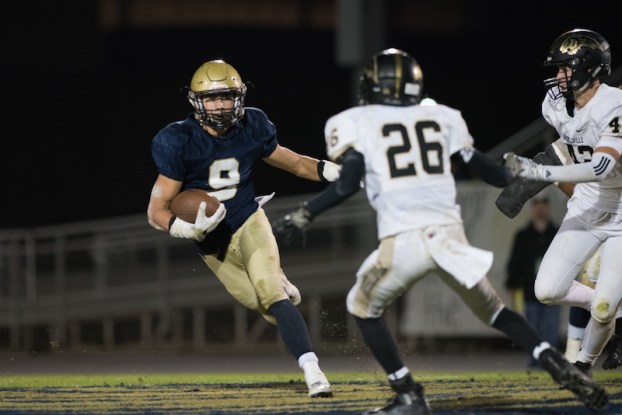 JR Tran Reno will look to have another successful outing against Mortimer Jordan with a trip to the semifinals of the playoffs on the line. (Reporter photo/Keith McCoy)

NORTH SHELBY – We’ve already made it through two weeks of the 2016 postseason and after starting with six playoff teams, we have already dwindled down to just one, the Briarwood Christian School Lions.

Calera and Montevallo were both handed losses on Friday, Nov. 11 to end their respective season. The Eagles fell on the road to Carroll 28-8, while Montevallo lost to Class 3A No. 2 Mobile Christian 36-14. The Lions are now the lone survivor and the only hope left for one of Shelby County’s many successful teams to bring home a 2016 state championship.

Last week Briarwood had no problem handling Russellville, downing the Golden Tigers 33-13 to advance. They had a strong first half as they jumped out to a 23-0 lead and wouldn’t even consider looking back. This week, however, they have a tough matchup with Mortimer Jordan in a rematch of a game earlier this season.

In the first meeting between the two teams Briarwood got the better of the the Blue Devils 23-14 behind a strong defensive performance. The Lions held the high powered Mortimer Jordan offense to just 295 total yards. Briarwood was also helped out by strong performances from quarterback William Gray who racked up 253 combined yards and JR Tran Reno who added an additional 109 total yards.

Since that game the No. 7 Blue Devils have reeled off six consecutive wins averaging 36 points per game. Briarwood on the other hand has seen the likes of Gray and Tran Reno get even better and haven’t lost since their first game of the season. Since playing Mortimer Jordan the first time around, the Lions have won seven consecutive games and are averaging a whopping 40 points per game over that stretch, and maybe even more concerning for their opponent, they are only giving up 12.4 points per game. Those are two stats that don’t bode well for the Blue Devils after struggling to score and stop the Lions the first go around.

It seems like the combination of Briarwood’s potent offense and lock down defense will just be too much for Mortimer Jordan to overcome. The Blue Devils lost the first matchup in Kimberly by a score of 23-14 and will lose this one as well as the Lions advance to the semifinals for the first time since 2011. Briarwood 34 Mortimer Jordan 16