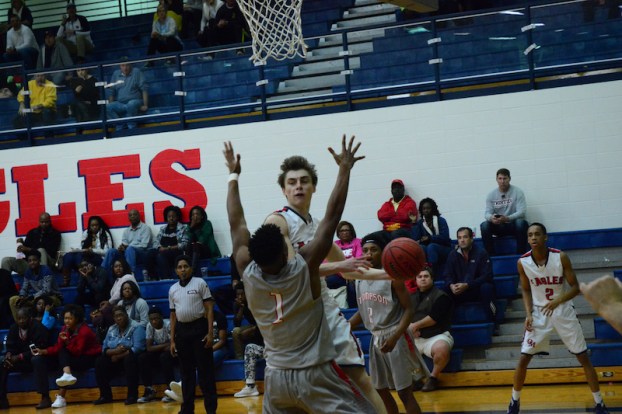 Thompson looks to be sound on the defensive end of the court for the 2016-17 season under new head coach Kelly Cheatham. (File)

ALABASTER – The 2016-17 Thompson basketball squad is going to look a lot different than last year’s as the team welcomes in first year head coach Kelly Cheatham takes over for long time coach Patrick Davis, who moved on to Vestavia.

Cheatham comes from Ramsay where success was no stranger to him over his 15 years there. He led the Rams to two state titles, four state championship finals appearances and six Final Four appearances. Cheatham and the Warriors are hoping that success will transform last year’s 15-13 record and early playoff exit into a deep run at a championship.

“When we first got here we talked to the guys about what made me successful at Ramsey,” Cheatham said. “I told them they had to work hard because there are now shortcuts. It will be tough for them to believe in the coaches and trust each other, but if they do we will be successful.”

The Warriors did lose Third Team All County Forward Michael Freeman, who averaged 14.7 points and 6 rebounds per game as a senior last year. Freeman was the main offensive weapon and gave the team size down low for a team that lacked big men.

They also graduated eight other seniors off of last year’s team and will only two guys back from last season’s varsity squad, only one of which played a lot of minutes. Senior point guard Drew Thomas, an honorable mention on last year’s All County team, will be looked upon as the leader of the team.

“We have a lack of experience, which will be a challenge for us this year, but once they get comfortable with the system and settle into the season, we will be just fine,” Cheatham said.

This season’s team will only feature three seniors on and will be forced to have four juniors and four sophomores contribute toward their success.

“We are definitely going to have to have a team effort because we don’t have a (Alex) Reese or (Jamal) Johnson type of kid,” Cheatham said. “We will have to get effort from everybody including the bench.”

Cheatham did say having a younger team and a new coach can help because a lot of veteran guys would be used to one system that had been hammered into them.

Early on in practice Cheatham said there have been a few things that concern him.

“The consistency and intensity hasn’t been where it needs to be in practice, which can lead to inconsistency in the game,” he said. “I know I’ve said a lot of negative things, but honestly I really feel like we are in a good place right now. Once they get a grasp of the system and realize how much success they can have we will be just fine. An early season win or two will definitely help their confidence grow.”

Cheatham said his team will be small and scrappy this year, which is a positive.

“A lot of people look at a lack of size as a negative, but we want to play fast and run the floor,” he said. “We like to be able to control the tempo whether it’s up tempo or a more methodical pace, but prefer to get up and down the court.”

The Warriors will be a team that focuses on defense, especially early on, so they can try to focus easy transition baskets on the offensive end of the floor. Cheatham said being sound on defense is the key to their success.

Who’s in? Clearing up the XC State Championship

By ALEC ETHEREDGE | Sports Reporter This Saturday, Nov. 12, marks the end of another fall cross country season as... read more