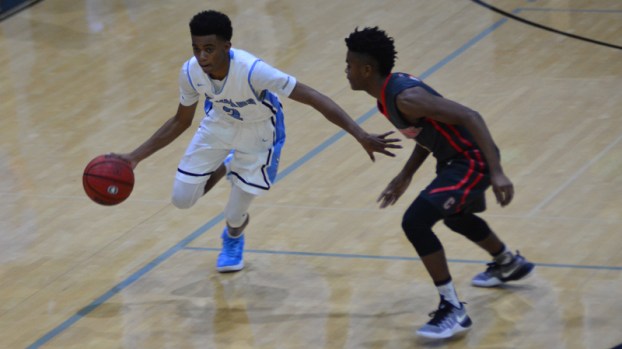 HOOVER – Spain Park High School’s first three possessions of the boys basketball season signaled things to come for the rest of the game—and possibly the season.

On the first possession of the game, 6-foot-7 senior Ronald Fortson grabbed an offensive rebound and put it back in for the game’s first points, followed soon thereafter by an assist from Fortson to Gordie Stewart, a transition pass from Jamal Johnson to Xavier Blanchard for a dunk and a free throw by Johnson as he was fouled taking the ball to the hoop.

SPHS had a 7-0 lead by the time Cornerstone scored, on a three-pointer by Rayel Oden.

Another Oden triple pulled the visitors to within one point of the lead, 10-9 in the first quarter, but Cornerstone could not slow Johnson, who scored 11 of his game-high 27 points in the opening frame.

Jaguars coach Donnie Quinn said he was pleased with his team’s intensity level, which was maintained even after they built a large lead and appeared sure to secure the victory.

“I told them that a young team probably would have been out there taking some plays off,” Quinn said. “But we shared the ball even when the score got a little out of control.”

Trey Johnson had 13 points for the Jaguars, and Stewart had 12 points.

Nine players scored in the game for Spain Park.

The hosts led 25-15 after one quarter of play, 47-26 at halftime and 72-36 after the third quarter, but Quinn said both teams continued to compete.

“The score does not indicate how hard the game was,” he said. “They were pressing us so it was hard to run anything.”

The Jaguars are scheduled to visit Ramsay on Nov. 12 and Lee Huntsville on Nov. 14.