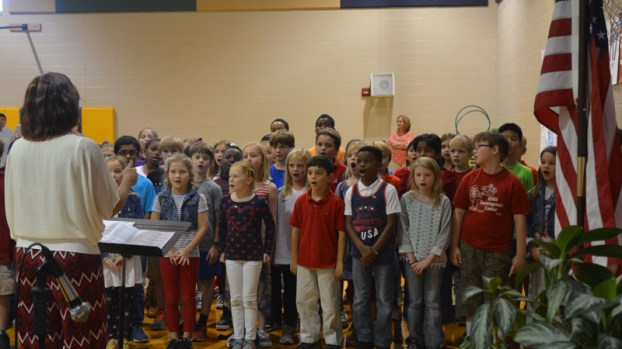 School Principal Alice Turney welcomed the many veterans in attendance and other visitors.

“We are truly blessed to have you in attendance today,” Turney said to the veterans and said she began to understand veterans’ sacrifices when her brother was deployed. “I realized what it meant to have a family member in service.”

Cub Scouts Den 8 Pack 367 presented the American flag and led attendees in the Pledge of Allegiance.

Everyone joined in singing the Star-Spangled Banner, and then third grade students sang “Thank You Soldiers” and “A Grateful Nation.”

Fifth grade students recited “The White Table,” which was a series of items that represented veterans and their sacrifices. 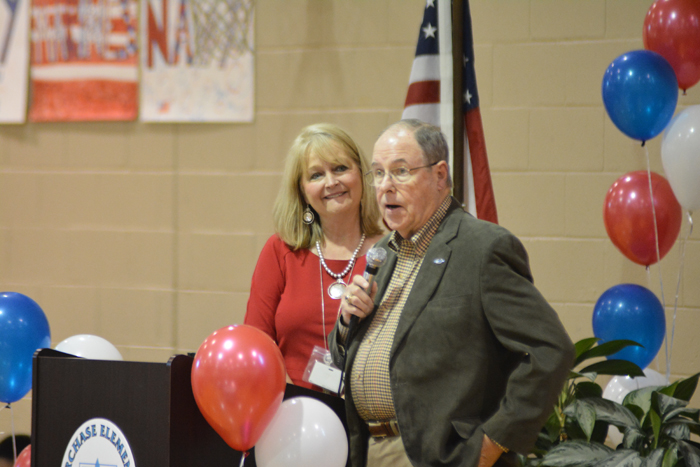 The 313th Army Band Brass Quintet then played an Armed Forces medley, and veterans in attendance were encouraged to stand when they heard their branch of the military’s respective song performed.

School counselor Patti Tanner was joined at the microphone by Walter Hughes, retired from the U.S. Army, for a “veteran interview.”

Hughes said he was deployed to Vietnam in 1965, returned home, was released from active duty but then joined the Army Reserve.

Hughes talked about the importance of recognizing veterans and also making good grades in school.

“Education is extremely important no matter what your direction in life may be,” Hughes said.

Hughes also encouraged students to take care of their minds and bodies.

“Pick up a book and read, and challenge yourself continually,” he said.

Hughes reminded those in attendance that: “Freedom is not free. It comes at a cost, and a lot of people have paid that cost.”

Veterans at the program were invited to the school lunchroom for a reception with students and guests.

By GRAHAM BROOKS / Staff Writer HELENA–The Helena Belles, an organization that is made up of young women in grades... read more