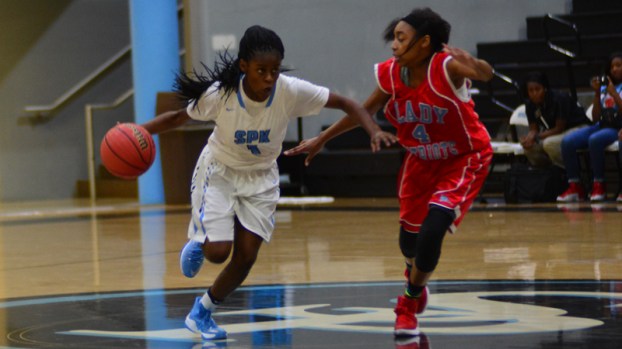 HOOVER – Claire Holt and Sarah Ashlee Barker combined for 30 points, and Spain Park High School’s girls basketball team pulled away in the fourth quarter for a 65-54 season-opening win over Midfield on Nov. 10.

The Jaguars led 31-27 at halftime, and grew the lead to seven points, 40-33, on an inbounds pass from Barker to Ashlyn Ferlisi that resulted in an easy layup with a little more than 3 minutes left to play in the third quarter.

But Midfield fought back, and with about one minute remaining in the quarter, a full-court press steal set up Keondra Hollis for a three-pointer to make the score 43-40 in favor of the visitors.

Spain Park retook the lead when, with time running out in the quarter, Holt dribbled down the court and was fouled while shooting from beyond the arc. She made all three free throws to make the score 45-43.

The play that may have put the game away for the Jaguars came with 4:40 on the clock in the final frame.

Holt heaved a one-handed pass down the court in transition to Bailey Bowers, who somehow was able to both catch the ball without going out of bounds and get it to Barker, who finished the play to give SPHS a 56-46 lead that would not be threatened the rest of the way.

“We went through stretches when we played really good—broke the press, got the ball to the appropriate person and finished on the other end,” SPHS coach Michael Chase said. “Then we had stretches where we made too many unforced errors.”

The Jags converted 16 of 23 free throw attempts overall and seven of eight in the fourth quarter to secure the victory.

“You don’t get into the 1-and-1 until the second quarter and the fourth quarter, and when we did we were able to make the free throws,” Chase said. “You kind of have to absorb those kinds of things in the first and third quarters.”