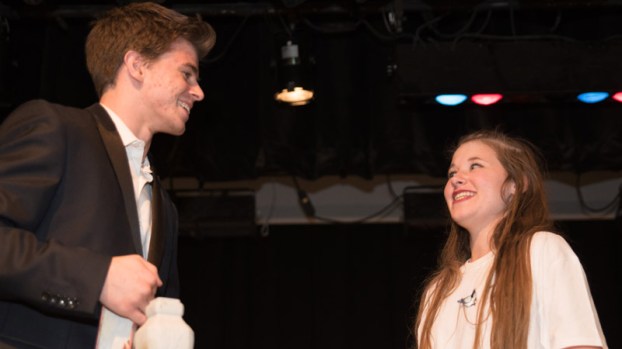 NORTH SHELBY- Oak Mountain High School’s performance of “Romeo and Juliet” opened on Nov. 10 at 7 p.m. at the OMHS Auditorium.

Director and OMHS theater teacher Amy Strickland, who became head of the Theater Dept. after the previous drama teacher retired, said that “Romeo and Juliet” is the first of a series of productions from the new Theater Dept.

“This is the introduction for the new theater program. If you want to see what he Oak Mountain Theater Department is going to be like going forward, this is our debut,” said Strickland.

Strickland said that she specifically selected this play to coordinate with the pre-existing English curriculum.

Strickland also said that she picked the play in order to be more inclusive to students.

“There were not a lot of productions done outside of the musical genre. I wanted to get kids who couldn’t sing a chance to be in something like this,” Strickland said.

Instead of using period costumes and settings, the play is set during the present day. Strickland said this was to help the audience relate to the play and stay true to Shakespeare’s original performances.

“It takes the play and it makes it feel more immediate to the kids. It’s more relatable to them,” said Strickland. “When Shakespeare put on plays, these actors got fancy clothing from whatever wealthy donors donated. They didn’t have special period costumes made. Even if they were dressing like Ancient Greeks, they put on a toga over their regular Elizabethan clothing.”

Student actor Rachel Cartwright, who plays Juliet, said that the production has challenged her and helped her grow as an actor.

“It was completely different from anything I’ve ever done before. This is what I want to do as a career and I think that it’s good to get different backgrounds and aspects of theater,” said Cartwright. “It’s made me reach out of my comfort zone, which is something you constantly have to be doing as an actor. It’s made me experience things that I never would have if I had never done anything from Shakespeare.”

Cartwright, who has previously acted with ACTA Theater, The Leeds Theatre and Arts Center and the Red Mountain Theatre Co. also said that she has never performed in a Shakespearean play before. Cartwright plans to act professionally as a career.

According to Strickland, rehearsals for “Romeo and Juliet” lasted for 10 weeks. Strickland said that the cast bonded well throughout the rehearsal process.

“I think they’re becoming a pretty big family. I’ve noticed some kids from different social circles who might have never interacted if it weren’t for this play,” Strickland said.

“It’s helping us create another aspect in the community, aside from sports,” said Strickland. “Kids are getting excited to see their friends in the show. It’s interesting to hear the conversations about this play. It’s going to be fun. The easiest selling points are lots of fights and romance,” Strickland said.